Posted on January 13, 2012 by Gratiana Lovelace

Author’s Scheduling Note:  “Guy’s Rose” will continue being serialized here on my blog on Mondays and Fridays until the story line is completed. Links to earlier chapters are found after the image references. 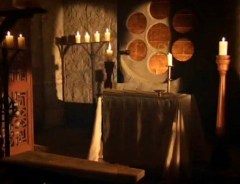 love and their lovemaking lingering in their hearts–Sir Guy and his betrothed Lady Roseanna make their way to the secluded Palace chapel [(2) right] to consult with Father Bale about secretly marrying them this eve.  Theirs is a bold plan–to deceive Prince John and gain the upper hand in palace intrigues.  It will not be easy.  Walking into the small chapel, Sir Guy and Lady Roseanna see Father Bale kneeling on the stone floor in prayer before an altar and gleaming gold cross reflecting the afternoon sunlight streaming in through the window.  They stand reverently back out of respect, while bowing their own heads in prayer.   In a few moments, Father Bale finishes his prayers and he stands to greet them.

Fr. Bale:  “Lady Roseanna my child!  It has been too long.”  He says warmly as they kiss cheeks in familiarity.

Lady Roseanna:  “Fr. Bale!   It is so good to see you again.  This is my fiancé, Sir Guy of Gisborne.  Guy, this is Fr. Bale.”  The two men nod their heads courteously at one another.
Sir Guy:  “Fr Bale.”

Fr. Bale:   Taking Lady Roseanna’s hands in his, Fr. Bale says.  “My dear, I learned of your betrothal only this morning when I returned from my journey back from your estate at Leicester.”  Fr. Bale looks carefully at Sir Guy [(3) right], taking the measure of the tall handsome rogue of a man whose past nefarious actions are well known to him.  “This seems … sudden.” 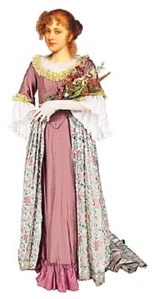 Lady Roseanna:   “More than you know.”  She says impishly.  “Sir Guy and I wish to be wed by you this evening in secret.”  Lady  [(4) right] Roseanna looks at the cleric pleadingly.

Fr. Bale: “Kkkk!”  Coughing in surprise, he continues.  “But Milady, there are the banns and royal protocol to follow.   You are planned to wed in six weeks time.   Why the haste?”  Not to mention the danger he will be placing himself in for wedding them should Prince John find out.

Sir Guy stands still and says nothing, letting Lady Roseanna spin what tale she wishes to convince him to perform the ceremony–since Fr. Bale is her family’s retainer.  Sir Guy just does not expect Lady Roseanna to take the approach she does–complete honesty.

Lady Roseanna:  Blushing she says, “We are in love and we do not wish cousin Johnny to part us out of malice.  Well, you know him.”  She looks at the cleric knowingly.

Lady Roseanna:  “And …  I could be with child.”  Sir Guy stiffens at Lady Roseanna’s bold revelation and he also blushes.  Lady Roseanna has played her trump card well to the cleric.

Fr. Bale:  After recovering from his initial shock at her scandalous confession–and glowering at Sir Guy–Fr. Bale says.  “Then you ‘must’ wed my lady.  Kneel down before me now.”

Taken aback that their rushed secret wedding will be now–and not this evening–Sir Guy finds his voice.

Sir Guy:  “Is this what you truly wish, Milady Rose?”

Lady Roseanna:  Putting her hand on his chest and gazing up at him lovingly, she says. “Yes Guy, I wish to be yours forever.”

Fr. Bale:  “Very well.”  He nods his head satisfied that Lady Roseanna has not been tricked into this secret marriage a seduction.  “Kneel down.” He entreats them again, and they do.  “I will dispense with the usual formalities and get right to the heart of the matter.”  Sir Guy and Lady Roseanna nod.  “Lady Roseanna Middleton, Do you of your own free will take this man Sir Guy of Gisborne to be your wedded husband–to have and to hold from this day forward as long as you both shall live?”

Lady Roseanna:  Saying solemnly, but with love as she glances at Sir Guy.  “I do.”  Sir Guy smiles lovingly at her.

Fr. Bale:  “Sir Guy.”  Sir Guy whips his head in attention back to Fr. Bale.  “Do you of your own free will take this woman, Lady Roseanna Middleton to be your wedded wife–to have and to hold from this day forward as long as you both shall live?”

Sir Guy:  Smiling broadly with love for his Lady Rose, Sir Guy says commandingly.  “I do.”

Fr. Bale:  “Then stand and face each other and repeat after me in unison,”  Sir Guy and Lady Roseanna do as he bids them, clasping their  hands together looking lovingly at one another.   “I Roseanna/Guy take you Guy/Roseanna.”

Fr. Bale:  “To be my lawfully wedded husband/wife.”

Lady Roseanna/Sir Guy:  “To be my lawfully wedded husband/wife.”

Fr.  Bale:  “To love and to cherish, in sickness and in health, til death do we part.”

Lady Roseanna/Sir Guy:  “To love and to cherish, in sickness and in health, til death do we part.”

Fr.  Bale:  “With the power of almighty God I declare you to be husband and wife.  What God has joined together, let no man put asunder.  You may kiss your bride, Sir Guy.”  Though with Lady Roseanna’s admission earlier, Fr. Bale thinks that may be unnecessary.  Their marriage bed has already been consummated by them.

Fr.  Bale:  “I will draw up the marriage license and bring it to you this evening after the feast.”

Fr. Bale:  “Sir Guy, the only debt you have to repay is in insuring Lady Roseanna’s happiness for the rest of her life.”  He admonished him.

Sir Guy:  “It will be my honor and privilege to see to this charge.”

Lady Roseanna smiles.  She is a bride on her wedding day and all is right with her world–for now.

To be continued with Chapter 23

(1c)  Guy’s Rose story graphic composite image representing  Lady Roseanna Oxbridge Middleton was changed to grayscale and cropped to head only of “A Portrait of a Young Lady” by Eugene de Blaas was found at  http://www.paintingall.com/images/P/Italian-Academic-Classic-Painter-Eugene-de-Blaas-A-Portrait-Of-A-Young-Lady-Oil-Painting.jpg

(2)  Image representing the Medieval Chapel in Nottingham castles is a photo manipulation of the image from Robin Hood Series 3, episode 6 (pix 138) was found at http://www.richardarmitagenet.com/images/gallery/RobinHood/album/seasonthree/Episodesix/slides/ep6_0138.html

(4) Image representing Lady Roseanna is a composite of: head only of “A Portrait of a Young Lady” by Eugene de Blaas was found at  http://www.paintingall.com/images/P/Italian-Academic-Classic-Painter-Eugene-de-Blaas-A-Portrait-Of-A-Young-Lady-Oil-Painting.jpg; and the pink renaissance dress found at http://www.buzzle.com/img/articleImages/3442-13.jpg

Gratiana Lovelace is my nom de plume for my creative writing and blogging. I write romantic stories in different sub genres. The stories just tumble out of me. My resurgence in creative writing occurred when I viewed the BBC miniseries of Elizabeth Gaskell's novel North & South in February 2010. The exquisitely talented British actor portraying the male lead John Thornton in North & South--Richard Crispin Armitage--became my unofficial muse. I have written over 50 script stories about love--some are fan fiction, but most are original stories--that I am just beginning to share with others on private writer sites, and here on my blog. And as you know, my blog here is also relatively new--since August 2011. But, I'm having fun and I hope you enjoy reading my blog essays and my stories. Cheers! Grati ;-> upd 12/18/11
View all posts by Gratiana Lovelace →
This entry was posted in Authors, Creative Writing, Fan Fiction, Guy's Rose, Love, Love and Relationships, Richard Armitage, Robin Hood, Romance and tagged Creative Writing, Fan Fiction, Guy's Rose, love, Love and Relationships, Robin Hood, romance, Sir Guy. Bookmark the permalink.