Posted on November 11, 2012 by Gratiana Lovelace

The 11th hour of the 11th day of the 11th month signaled the official end to World War I–known thereafter as Armistice Day [(1)].  You would think the world and its peoples would have learned its lesson then.  But it didn’t and it still has much to learn.

My late father was a WWII veteran and he haltingly stood up from his wheelchair–as I held him up from behind–while attending his care facility’s November 11th service in 2010.  His patriotism made me tear up even more because we had not seen him stand for many months due to his frail health–nor would he be able to stand ever again before his death five months later the day after Easter that year.  Gratefully, he was too young to have seen combat in WWII–he helped rebuild roads and bridges in the Pacific Theatre.  Yet he still had shrapnel lodged in his heel from a land mine being disarmed that was accidently dropped near him.

An older church friend of ours was not so lucky as he had seen and experienced the savage human cost of war in WWII.  That this jovial and kind man was struck mute and despairing–with someone’s careless off hand remark that recalled to him the horrors of war that he had witnessed–chastened all of us gathered together.  He did not need to give us details, we had all seen the sobering documentaries.  The living and the dead have paid far greater a price for our peace and freedoms than we will ever be able to repay them for.

It is a debt we can only hope to partially amend by our valuing our peace and freedoms, by our not squandering our rights and privileges, and by our seeking to make life better for others whenever we can.  None of us have made our way in this world without help from someone else–be it someone:  changing our diapers and feeding us when we were little; guiding our first steps and correcting our missteps when we were older; teaching us how to read and write and how to know right from wrong; working collaboratively with us and our coworkers while recognizing everyone’s contributions to achieving the goals we have set; and emphasizing that a community is not merely a zip code one lives in, a community is something that we build together.

The United Nations [(2)] was begun in 1945 in the hope of promoting community around the world after WWII.  One of the UN’s important documents is “The Universal Declaration of Human Rights” [(3)], its preamble begins:

Whereas recognition of the inherent dignity and of the equal and inalienable rights of all members of the human family is the foundation of freedom, justice and peace in the world,

Whereas disregard and contempt for human rights have resulted in barbarous acts which have outraged the conscience of mankind, and the advent of a world in which human beings shall enjoy freedom of speech and belief and freedom from fear and want has been proclaimed as the highest aspiration of the common people, …”

We can’t solve all the world’s ills by ourselves.   But we can try to make a difference by 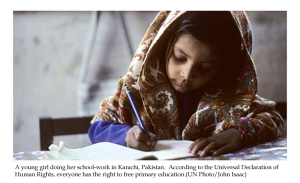 picking our cause(s) and working for it(them)–whether it is children, education [(4) right], healthcare, feeding the poor, etc.  And let us not let indecision delay us, just start somewhere.  The holidays are coming up and people on the margins will need our help more than ever.  So if we do nothing else, let us make a donation of food or clothes or money to our neighbors in need through our local agencies.

My husband and I don’t give ourselves Christmas gifts, we give to others.  One of the things that we do is that we participate in a local Holiday Helper effort to provide gifts for needy kids.  We are given the child’s first name, age, size for clothing, and any gift wishes the child has.  The minimum gift is $40, but having no children of our own we tend to go overboard a bit.  So last year, seven year old Marcus received a winter coat and snow pants, gloves and hat and snow boots, and two of his toy requests–with gift receipts for his mother in case clothing sizes or colors needed to be exchanged.  We also included a hand written note for him with pictures of our doggies wearing Santa hats.

Peace and freedoms happen one person at a time, and by loving our neighbors as we love our selves.   So wherever we live around the globe, if peace and freedoms are ours then we should be grateful for them and respectful of them.  But I also urge us all to work for peace and freedom for ourselves and others–locally and globally.  There are people right now in our own communities who need our help and agencies we can volunteer with or donate to in order to provide that help.  And if we can be concerned about our nearest neighbors’ welfare, then we can also think of our neighbors in other states or provinces and nations around the world.  We are different peoples and cultures, but we share the same home, the Earth.

To close, here is a charming video by PAIX07 of children around the world proclaiming “peace, love, and hope” [(5) below]:

(2)     A history of the United Nations was found at http://en.wikipedia.org/wiki/United_Nations ; for more information, visit the UN web site at http://www.un.org/en/

(3)     Preamble to “The Universal Declaration of Human Rights” is found at http://www.un.org/en/documents/udhr/index.shtml

(4)     Picture of a young girl at school and more information about human rights on the United Nations web site is found at http://www.un.org/en/rights/

Gratiana Lovelace is my nom de plume for my creative writing and blogging. I write romantic stories in different sub genres. The stories just tumble out of me. My resurgence in creative writing occurred when I viewed the BBC miniseries of Elizabeth Gaskell's novel North & South in February 2010. The exquisitely talented British actor portraying the male lead John Thornton in North & South--Richard Crispin Armitage--became my unofficial muse. I have written over 50 script stories about love--some are fan fiction, but most are original stories--that I am just beginning to share with others on private writer sites, and here on my blog. And as you know, my blog here is also relatively new--since August 2011. But, I'm having fun and I hope you enjoy reading my blog essays and my stories. Cheers! Grati ;-> upd 12/18/11
View all posts by Gratiana Lovelace →
This entry was posted in Hope, Love, Peace and tagged Hope, love, Peace. Bookmark the permalink.