Posted on January 16, 2013 by Gratiana Lovelace

There was a fun quiz that Faboamanto tweeted the link for the other day regarding who might be one’s literary boyfriend.  She got Darcy.  I got Heathcliff.  I’m always with the drama queens.  Ha!  Happily, my real life hubby ended up to be a bit more sanguine than Heathcliff, has a better sense of humor, yet he still retains all of the seething passion.  Snap!

So I thought that it would be fun for me to come up with a quiz that might help us identify who our preferred Richard Armitage Character as Boyfriend might be.  I am only marginally harkening back to one of my earliest blog posts (#14) for research on creating some of the questions and foils/answer choices.  But I link it here since it is a rather popular blog essay of mine that you might also enjoy.

The Richard Armitage Character as Boyfriend Quiz  below has no scientific validity, 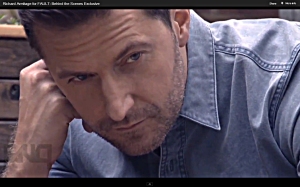 is not reliable, and it will surely tick someone off because their character is not represented or they don’t get him as their Richard Armitage character as boyfriend when they look at the answer key (no peeking).  Ha!

Oh and for a heart stoppingly gorgeous Richard Armitage portrait to inspire us, here is my screen cap (right) from the January 2013 FAULT magazine photoshoot video.  Now Ladies remember, when you zoom your screen in for a virtual kiss–and you will–be sure that you are wearing only clear lip gloss.  Lipstick is so hard to get off of these LCD screens.  Ha!

*Fanning myself*   I am just a puddle of womanly essence right now.  Sighhhh!

Okay, regrouping.  So let’s have a go with the Richard Armitage Character as Boyfriend Quiz, shall we?  A key will be shared at the end of this post to help you identify which Richard Armitage–that is, which of RA’s character portrayals are your preferred boyfriend material–such that you want to kiss, cuddle, conjoin, conjugate, canoodle, and have coitus without interruptus.  *wink*  Please choose only one answer for each of the five questions–tough love.  Ha! 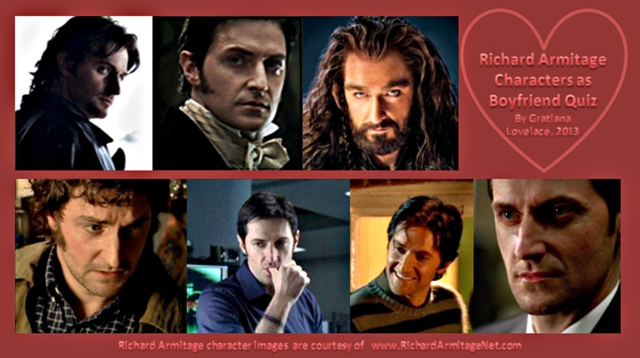 Interpreting your Richard Armitage Character as Boyfriend Choices (I am bluffing, here):

Thanks for playing along with my Richard Armitage Character as Boyfriend Quiz.  I hope that you had giggly good natured fun!  My flirty facetious chip was in full flower today.  Ha!

Gratiana Lovelace is my nom de plume for my creative writing and blogging. I write romantic stories in different sub genres. The stories just tumble out of me. My resurgence in creative writing occurred when I viewed the BBC miniseries of Elizabeth Gaskell's novel North & South in February 2010. The exquisitely talented British actor portraying the male lead John Thornton in North & South--Richard Crispin Armitage--became my unofficial muse. I have written over 50 script stories about love--some are fan fiction, but most are original stories--that I am just beginning to share with others on private writer sites, and here on my blog. And as you know, my blog here is also relatively new--since August 2011. But, I'm having fun and I hope you enjoy reading my blog essays and my stories. Cheers! Grati ;-> upd 12/18/11
View all posts by Gratiana Lovelace →
This entry was posted in Creative Writing, Love and Relationships, Multi-Character RA, North & South, Richard Armitage, Sexy, Sir Guy of Gisborne, Sparkhouse, Spooks, Strike Back, The Hobbit, Thorin and tagged Creative Wriing, Love and Relationships, Multi-Character RA, North & South, Richard Armitage, Sexy, Sparkhouse, Spooks, Strike Back, The Hobbit, Thorin. Bookmark the permalink.

37 Responses to Wild Card Wednesday: Which Richard Armitage Character Would you Prefer for Your Boyfriend? (PG-13) 1/16/13 Gratiana Lovelace (Post #345)