Posted on September 12, 2013 by Gratiana Lovelace

Having a thing confirmed is quite different from having the suspicion of it.  And I am not quite sure how I feel about that yet. But on the flip side, dryness in the age of adult diaper commercials might be considered by some to be a plus at my age–my age being on the sunny side of matronly.  Ha!

But the need for constant lubrication to lessen the pain in my eyes, sinuses, mouth (including swallowing issues), throat, skin, and nether regions, etc., becomes a continual effort to keep moist, coated, and supple, etc. 24 hours a day.  And yes, I wake up in the middle of the night with painfully bone dry eyes that I have to moisten with drops and a severely parched throat that I have to lubricate with a special gel.  And these difficulties are only the outward signs of what may also be affecting my internal organs and their functioning. 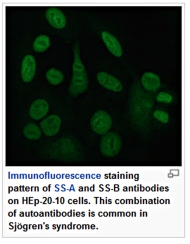 intuitive, and certainly not helpful.  It is not like my body is a petulant child deciding not to play nicely with its friend in the sandbox in a fit of pique.    Although, maybe it is.  You see, the extreme symptoms of dehydration across my body that I have experienced the past year–after several years of worsening dryness–has finally been diagnosed as an autoimmune disease called Sjogren’s Syndrome (pronounced show-grins).  Well, at least what is going on with my body has a name–and I can pronounce it.  Ha!  (see image right)

And no folks, my being fat has nothing to do with my health issues!  I state that categorically because a few years ago–before all of my extreme eye disease symptoms started last year–my internist’s then nurse practitioner suspected that I had Sjogren’s Syndrome disease and they sent me for some blood tests and to see a rheumatology specialist, since my blood tests showed that I was borderline for it.  This initial rheumatologist doctor did not take my medical history and only focused on my arthritis symptoms–which I will grant you were the more painful symptoms at that time–and said if I lost weight, all of my problems would be solved.  I chalked that doctor up to being lazy and prejudiced against fat people.  How I wished that I would have asked for a second opinion then. Maybe I would have been sent to a doctor who was a better diagnostician–and not have had my eye pain and vision deterioration, etc., that I am now experiencing.  But hindsight for me is a lesson for all of us to advocate for our own best health care.  And don’t let insulting doctors keep us from the right diagnosis.  Okay, I am off my soap box now.

The autoimmune disease Sjogren’s Syndrome is chronic and not curable, and it is thought that it might be caused by two potential factors–a virus or genetics (excerpted from Wikipedia; image right):

“The pathogenesis of Sjögren’s Syndrome is not well understood. The number of factors

involved in the progression of the disease makes it difficult to determine its exact origin and cause.[14]

Sjögren’s Syndrome was originally proposed to be a specific, self-perpetuating immune system-mediated loss of exocrine glands, specifically acinar and ductal cells.[15] Although this explains the more obvious symptoms, i.e. the lack of salivary and lacrimal fluid, it does not explain the more widespread systemic effects that are seen in the progression of the disease.[16]

The current theory behind the origin of the disease involves a two-hit hypothesis; the first hit is a genetic predisposition to the disease. The second hit occurs upon challenge with a virus. It is suggested that upon presentation of a virus antigen, such as Epstein-Barr virus (EBV), dysfunctional plasmacytoid dendritic cells begin to produce elevated levels of Interferon α (IFN α).[15] This increased level may then incorrectly stimulate auto-antigen myeloid dendritic cells, which would elicit an immune response resulting in the stimulation of autoreactive T cells and the proliferation of autoantibody-producing B cells. This would ultimately result in the destruction of the tissues and glands giving rise to the symptoms associated with Sjögren’s Syndrome. The genetic predisposition may involve the formation of dysfunctional plasmacytoid dendritic cells that have been theorized to play a role in the pathogenesis of Sjögren’s Syndrome.[15] Normally, a cell presenting an antigen incorrectly would be detected, and directed to undergo apoptosis thus preventing any manifestation of the disease.[14]”

So initially, I am being placed on a drug that, among other things, also has had some success in systemically improving moisture production in the body’s exocrine glands for Sjogren’s patients–as a simplistic way of looking at it–using a drug that is manufactured from a plant native to Brazil. Thanks to my Brazilian Friends! Muito obrigado!  And curative medicines from specialized plant species is yet another reason to save the rainforest.  Snap!  I am on a very low dose to begin with–both because  there are some side effects of the medicine that I have to look out for such as dizziness, fainting, heart symptoms, and diarrhea, etc.;  and because the medicine is used to caused epilepsy in lab rats for the study of that disease–and the medicine can get into the human brain and cause epilepsy.  However, since I am not a lab rat, I take heart.  Ha!  And  who knows!  Maybe my skin will become so supple and youthful looking–in addition to my already nice complexion–that the AARP folks will stop beating down my door.  Ha!
[Update 9/11/13:  When I scheduled this essay Sunday morning, it was before I had a bad reaction to  the medicine mentioned above later that day–racing heart, sweating, spiked blood sugar, feeling faint, etc.   So, we’ll have to try a different medicine in a week once my body has been purged of this one.]

The other medicine choice was a malaria drug with worse side effects–more likelihood of diarrhea and increased digestive issues, which would have compounded the existing issues that I already have after having my gallbladder removed in 1999.  So, I did not leap to take this medicine to begin with.  Although I must say, I really miss not having had an exotic trip that it would have taken to contract something that would belatedly require me to take a malaria drug.  *facetious alert* But on the flip side, if I were to travel to an exotic locale, I would be already ahead of the game with my meds.  Snap!

Why am I telling you all this about my health?  Because if you are suffering similar symptoms  of extreme dryness and fatigue, that might be the autoimmune disease Sjogren’s Syndrome (explained via the Mayo Clinic site).   And if you haven’t found a doctor who has diagnosed it correctly, then you need to be your own best advocate and show them the printouts from the hyperlinks I have given you.  Not every doctor is as tenacious a diagnostician as on the tv show House.   I am one of the lucky ones, because my current optometrist kept pushing me to ask my internist again to see whether I have Sjogren’s–because every patient of my eye doctor’s who had eye symptoms as severe as mine (corneal abrasions and ulcers that won’t heal due to the extreme dryness, along with diminished vision) also had Sjogren’s–and I was then sent to a new rheumatology specialist who recognized my symptoms immediately.   Thank  god!

Another reason why I am telling you this about my health is that it is cathartic for me.  And I promise that I will not constantly barrage you with daily information about how I am feeling on a particular day–because Sjogren’s is a chronic disease that has no cure.  This blog post is it!  So you can sigh your relief.  I had a maternal  great aunt whom I loved very much, but she always talked about her health problems ad nauseam.  Though, I still had great sympathy for her difficulties–some of which were merely exaggerations of everyday aches and pains–I felt th

at she needed to try to focus on something outside of herself.  And I am glad to say that once my great aunt hit 101 years when I last saw her before she died many years ago, her outlook on life had completely changed for the positive and she felt that everything was wonderful–despite her being confined to a wheel chair at that point.  So you see, she was made of stronger stuff than even she realized.  Snap!  And life is a gift and a blessing, not to be wasted on regrets, or ruminating about things we cannot change (image left).  Serenity is a great word–as in the prayer graphic to the left–its synonyms are harmony, peacefulness, calm.  I like that.

For me, my outward focus is on my story telling–with a particularly 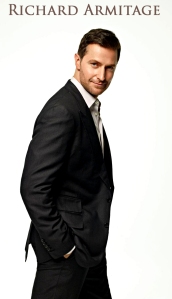 handsome and talented fellow as my muse and preferred leading actor in my stories, the British actor, Richard Armitage (RANet image right).    And my late father was a Michigander.  And way back on my Dad’s side of the family in 1803, we were British–so I come by my stiff upper lip stoicism naturally.  And you see, I am the type of person who does not like to dwell on my health problems–I feel that focusing on my pain and suffering is a self defeating proposition for me.

I prefer taking  my meds and various palliative body wide lubricating treatments and being upbeat while focusing on the positives in my life, of which there are many–starting with my wonderful loving hubby, our great extended family,  and including my many lovely friends across the miles whom I have met through the British actor Richard Armitage Fandom  and writers’ sites.

So I will continue to keep my “Something About Love” groove going here on my blog and on my Wattpad story site –with story posts once a week and an RA essay in between.

Oops!   Gotta go now.  My hubby is home from running his Saturday morning errands as I finish writing this. *wink*

Gratiana Lovelace is my nom de plume for my creative writing and blogging. I write romantic stories in different sub genres. The stories just tumble out of me. My resurgence in creative writing occurred when I viewed the BBC miniseries of Elizabeth Gaskell's novel North & South in February 2010. The exquisitely talented British actor portraying the male lead John Thornton in North & South--Richard Crispin Armitage--became my unofficial muse. I have written over 50 script stories about love--some are fan fiction, but most are original stories--that I am just beginning to share with others on private writer sites, and here on my blog. And as you know, my blog here is also relatively new--since August 2011. But, I'm having fun and I hope you enjoy reading my blog essays and my stories. Cheers! Grati ;-> upd 12/18/11
View all posts by Gratiana Lovelace →
This entry was posted in Creative Writing, Health, Richard Armitage and tagged Autoimmune Disease, Creative Writing, Health, Richard Armitage, Serenity, Sjogrens Syndrom. Bookmark the permalink.