Posted on September 14, 2013 by Gratiana Lovelace

(This is an original ficlet/short story by Gratiana Lovelace, All rights reserved;  The character of Thorin Oakenshield is from “The Hobbit:  An Unexpected Journey” by Warner Brothers, no copyright infringement intended)

Thorin Oakenshield, King Under the M 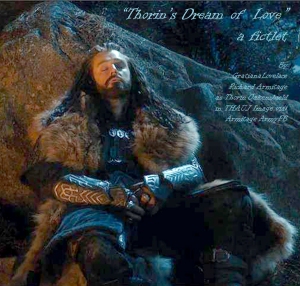 ountain, rests his back and head upon a broken piece of hard boulder. He is so weary from their journeying on their quest to reclaim Erebor, that even the discomfiture he feels soon gives way to sleep.  And in sleep, Thorin dreams of more pleasant surroundings, in the time before Erebor was lost.  What he dreams is not quite a remembrance, but a wishfulness for that earlier time of ease–before the dragon claimed his people’s home.

Prince Thorin is in his bedchamber in the fortress of Erebor in mid Winter.  The stone walls and floors are softened by finely woven Dwarvish tapestries covering the walls and rugs covering the hard floor.   His large bed is covered with intricately embroidered linens–a present from his sister Dis on his last birthday that he could not refuse–and blankets and pelts for warmth.

It is late this Winter night and darkness fell hours ago.  Prince Thorin hears a soft knock upon the heavy wooden door of his bed chamber and he turns toward the sound.  But before he can say “Enter” to admit his manservant to prepare him for the night, she slips into his room so quietly that it is almost as if she were a wisp of smoke stealing into his bedchamber through the cracks in the door frame.

Prince Thorin:  “Mistress Kiralin.” He bows with a small smile lifting at one corner of his mouth.

She is one of the Handmaids of Durin, an unmarried woman in Dwarven Middle Earth.   And he has seen her at court with the other ladies–and conversing with her brother, his manservant, Gralin, nephew to brothers Balin and Dwalin.  At almost thirty, she is younger than her brother by twenty years–but mature beyond her years.  And though her flowing chestnut colored hair has not been joined by  her womanly beard yet, the young twenty four year old and virile Prince Thorin finds her most pleasing.  He fears that others–Dwarf men contemplating her for their wife–would disagree with his assessment of her beauty due to her lack of beard.  Only the evidence of fine fuzz is beginning to trend toward its inevitable beard.

Kiralin:    “My Prince.”  She curtsies deeply and stays low until she bids her to stand.

Prince Thorin:  “Please.”  Prince Thorin raises his opened palm upward and she rises.  “You have something to tell me of your brother, Gralin?”  He raises an eyebrow.

Kiralin:  “He injured his arm during training and must wear a sling and rest for the next few days.   I have come in his place to tend to you again.”  She says this as if it were commonplace for her to do so. Perhaps, the ease between them is born of a growing familiarity.

Yet, she does not look at him for fear that he will turn her away again–as he has the other times. She cannot bear to see rejection in his eyes once more.

Prince Thorin:   Almost dismissing her, he thinks again upon it.  “Please extend to Gralin my hope for his swift recovery.”

Kiralin:  She curtsies again.  “Thank you, my Prince.”

Weary of having others curtsy and bow to him all day long like apples bobbing in a tub of water, Thorin expresses his displeasure.

Prince Thorin:  “Mistress Kiralin, if you are to attend me this night, we had best dispense with protocol or we will never accomplish our task.  And my weary body needs sleep if I am to brave tomorrow’s visitors.”

Kiralin:  She looks at him quizzically as she steps forward.  “The Elven King who comes to pay tribute?”

Prince Thorin:  “The very one.  He seeks our wealth and fine gold objects with precious gems to adorn himself with.”  He pauses, then says what is truly burdening his mind. “I thought you would not come to me again–my rudeness to you at our last parting was unforgivable.”  He sighs longingly.

Kiralin:  She quickly looks up and catches his eyes gazing upon her gown attired form.  “I will always come to you when you need me.  And though you might feel obligated to tell me again that we have no future, I do not wish to hear it tonight.  I choose to be here, to be with you.  And you cannot take this small space of time we have together from me.”  She proclaims proudly.

pervades Prince Thorin’s bed chamber.  The fire’s soft light casts a burnished glow upon everything in the room–upon them.  Prince Thorin gently caresses Mistress Kiralin’s face as she gazes up at him uncertainly, hopefully. Then Kiralin sets about her task of readying Prince Thorin for bed.

Thorin is clearly overdressed–even for battle.  Slowly, languorously, she removes his forearm cuff shields to reveal his thickness of wrist betraying the muscles that ripple beneath it.  Then he shrugs off his pelt coat and she lays it across the chest at the foot of the bed. He stands proudly in his dark blue velvet tunic and intricately forged mail breast plate–until they, too, are gone. A thin loose fitting shirt over his trousers and boots remain.

He sits and begins to undo the buckles of his boots. Then his lady, Kiralin, kneels before him and stays his hands.  Then she completes the unbuckling and then removes his boots.  Their eyes lock.   For she is also overdressed–which he soon rectifies by removing her corset, and gown–leaving her only in her long chemise.  Prince Thorin removes his shirt and stands bare chested before her.

her closer to him.  They embrace in passionate kisses and caresses–seizing this moment of love for themselves alone. The comfortable bed awaits them.  But first, the plush hearth rug and dancing firelight claim their first eager coupling–bearing silent witness to their lust and to their love.  The night is not yet half begun for these two lovers.

To be continued with Chapter 2

P.S. to Readers:  I was inspired to write this little ficlet/short story after seeing a graphic shared by becLadyOakenshield on Facebook, from an Armitage Army Portrait of Richard Armitage as Thorin Oakenshield sleeping (used in the story cover graphic).

Gratiana Lovelace is my nom de plume for my creative writing and blogging. I write romantic stories in different sub genres. The stories just tumble out of me. My resurgence in creative writing occurred when I viewed the BBC miniseries of Elizabeth Gaskell's novel North & South in February 2010. The exquisitely talented British actor portraying the male lead John Thornton in North & South--Richard Crispin Armitage--became my unofficial muse. I have written over 50 script stories about love--some are fan fiction, but most are original stories--that I am just beginning to share with others on private writer sites, and here on my blog. And as you know, my blog here is also relatively new--since August 2011. But, I'm having fun and I hope you enjoy reading my blog essays and my stories. Cheers! Grati ;-> upd 12/18/11
View all posts by Gratiana Lovelace →
This entry was posted in Hope, Kindness, Love, Richard Armitage, Romance, Sexy, Sir Guy of Gisborne, The Hobbit and tagged Hope, Kindness, Richard Armitage, romance, Sexy, Sir Guy of Gisborne, The Hobbit, Thorin Oakenshield. Bookmark the permalink.