Posted on March 6, 2014 by Gratiana Lovelace 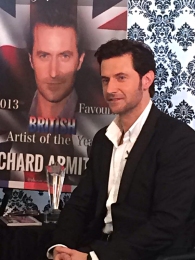 performances was driven by his fans via The Anglophile Channel’s Favorite British Artist of 2013 Award contest last December.  This award has such a grassroots effort feel to his win–to have the award coming from his fans voting for him–from the people who enjoy his artistic projects. So, this award seems very heartfelt to me. Mr. Armitage will no doubt win many more awards in what will hopefully will be a long and distinguished career for him–that gives him personal fulfillment and gives his devoted fans enjoyment in the stories that he tells us.  But this award seems extra special.

And to put the icing on the cake, Marlise Boland of The Anglophile Channel interviewed

Richard Armitage last week at the British Consulate in Los Angeles as part of presenting him with his award (1st 2nd, & 4th images right). Of special note is the lovely poster behind Ms. Boland and Mr. Armitage that she said was created by Thorin of Erebor.

By what we have seen so far in the videos, it was a wide ranging interview  (brava to her),

full of fun and goofy moments (from him, especially).  Mr. Armitage was so adorkable lunge kissing his interviewer Ms. Borland (my cap), after a bit of hinting on her part.   Lucky lady!  And the chair racing?   How cute is that?  This is a man who knows how to have fun and who is clearly comfortable in his very large shoes.  *wink*

Anglophile Channel about the interview–and they did not disappoint.  So, here are the videos  of the interview of Richard Armitage as the 2013  Favorite British Artist of the Year Award (right) that The Anglophile Channel has shared with us to date–Teaser, Part 1 and Part 2.  I will add any remaining links later as they are made available–kind of bookmarking it for myself and for you. I like keeping my Richard Armitage reference citations themed together.  Ha!  Enjoy!

“Richard Armitage INTERVIEW! Part One:  The Hobbit and More with Marlise Boland

“Richard Armitage Interview Part 2: There and Back Again with Marlise Boland” 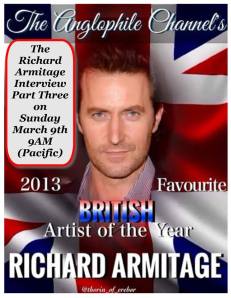 March 8, 2014, Thanks to TeresaA for pointing me to this news from The Anglophile Channel’s Facebook page:

“The Richard Armitage Interview Part 3 will be released Sunday March 9th at 9AM (Pacific DST…new time as we gain an hour tonight!) Thank you to Thorin of Erebor for this beautiful art! Visit her page!”

Grati will post this video link as soon as it becomes available.  And here it is:

Update March 16, 2014!   Here they are, The Anglophile Channel, Richard Armitage Interview Outtakes.  And once again, kudos and brava to Ms. Marlise Boland and her crew for a wonderful interview of Richard Armitage.  And thanks to Richard Armitage for his humor and fun exhibited in these interview segments.  Enjoy!

P.S.  Before fans knew that the Part 2 interview would drop on March 5th, I had planned to share with you a recent Thorin wallpaper manip that I created from a http://www.RichardArmitageNet.com DofS cap,  a www.theonering,net  Smaug poster, and a DofS film transcript from Queen of Erebor to aid my memory on the dialogue.  So, here is that wallpaper anyway–as a little bonus:

Gratiana Lovelace is my nom de plume for my creative writing and blogging. I write romantic stories in different sub genres. The stories just tumble out of me. My resurgence in creative writing occurred when I viewed the BBC miniseries of Elizabeth Gaskell's novel North & South in February 2010. The exquisitely talented British actor portraying the male lead John Thornton in North & South--Richard Crispin Armitage--became my unofficial muse. I have written over 50 script stories about love--some are fan fiction, but most are original stories--that I am just beginning to share with others on private writer sites, and here on my blog. And as you know, my blog here is also relatively new--since August 2011. But, I'm having fun and I hope you enjoy reading my blog essays and my stories. Cheers! Grati ;-> upd 12/18/11
View all posts by Gratiana Lovelace →
This entry was posted in Fangurling, Graphic, Humor, Interview, Richard Armitage, Sexy, Something About Love, Video and tagged fangurling, Graphic, humor, Interview, Richard Armitage, Sexy, Something About Love, Video. Bookmark the permalink.