According to RANet (www.RichardArmitageNet.com), Richard Armitage has a new role in the film adaptation of Bernard Hare’s memoir, “Urban Grimshaw and the Shed Crew” (minus the Grimshaw in the title):

“And from the Urban and the Shed Crew website:

It’s been described as a tale of heroin and cement, set in Britain’s underclass in the 90’s.

Twelve-year old Urban Grimshaw is Britains’ most runaway child, he’s even been on TV’s Crimewatch. His mother is a junkie and his father might as well be dead. He can’t read or write, and he doesn’t go to school. His average day is spent sitting round a bonfire with his mates smoking drugs and stealing cars. When he meets his mother’s new friend Chop’, a 37 year old, disillusioned, ex-social worker also living on society’s margins, on one of Leeds’ roughest estates the two become firm friends.”

Richard Armitage is slated to portray Chop who befriends and mentors Urban.

And here is a lovely mock film poster that Fernanda Matias shared on Facebook(image credits there of this Sarah Dunn portrait of RA): 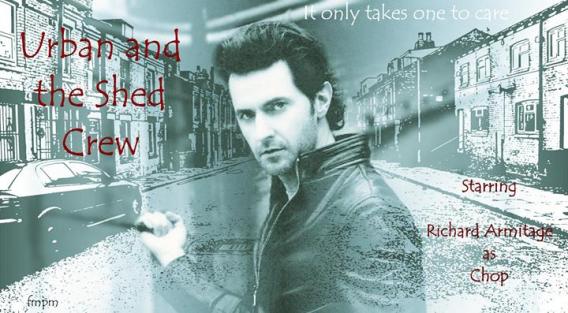 Since I like to keep my RA news–and blogger reactions to it–handily organized together, what follows are some handy links to various resources about this film shared by RANet and other bloggers (please sing out if the resource link was yours):

1)       RANet has lots of film, and book and video links at their March 15 News section:  http://www.richardarmitagenet.com/news.html#mar14

Such as the official web site:  http://urbanandtheshedcrew.co.uk/

And there is a large lexicon of urban slang that we will have to get our minds around–or need a cheat sheet for–that is highlighted on the UTSC web site listed above.  And you had best make sure on your vowels on your slang terms so that you don’t mix up “Nash” and “Nosh”.

2)      Armitage Agontistes shared an RAnet tweet with more confirmation about RA having the role:
http://armitageagonistes.wordpress.com/2014/03/14/urban-confirmation-of-the-new-role/

Be sure to follow the link to the supporting actress talking about her being in the film and mentioning RA.

3)      Richard Armitage US blog liked the fact that there was a love interest for RA’s character as it shared the RANet info:
http://richardarmitageus.wordpress.com/2014/03/14/huge-news-ras-got-a-brand-new-gig/

Yes, but the mentor relationship is the focus.

4)      However Servetus of MeandRichardArmitage, mentioned that Richard Armitage will play opposite Anna Friel, who is a well established actress and therefore good for RA to be paired  with Anna Friel who will portray Urban’s mother and Chop’s girlfriend–which is how Chop and Urban meet.  Here is the link Servetus shared:
http://en.wikipedia.org/wiki/Anna_Friel

5)      BBC Radio 3 piece on poverty that featured this story, “The Essay, Why Poverty?, Bernard Hare”:
http://www.bbc.co.uk/programmes/b01nzqvr

I tried to stick with five, but thought that you would enjoy the sixth as well.  There are many more blogger’s putting their impressions out there  and I hope that they will share their post links in the comments below.

I haven’t read the book, but probably will now–despite it not having a corset busting romance in it. Ha!  Because whatever story the exquisitely talented actor and storyteller Richard Armitage shares, I am eager to experience it.

Cheers!  Have a gReAt  Sunday!

P.S.  Whenever the Anglophile Channel posts its outtakes video today, I wll add that to my Post #525 where I have all of their Richard Armitage  2013 Favorite British Artists of the Year Interview vids linked.   You will also see the handy link to that post in the 2nd at top right in my blog sidebar.

Update March 21, 2014!!!—Urban and the Shed Crew film production.just tweeted the first glimpse of Richard Armitage in costume for his role as Chop: