Posted on April 3, 2014 by Gratiana Lovelace 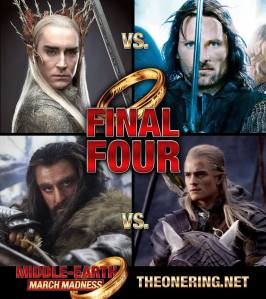 What will happen is anyone’s guess!  Will King Thranduil have more Elven macho mojo than his human counterpart King Aragorn?  Can Prince Legolas out bow King Thorin?

You know that my vote always goes to Richard Armitage (RA image right) portraying King Under the Mountain Thorin Oakenshield.  Sighhhh!  Afterall, Mr. Armitage did win the 2013 Favorite British Artist of the Year Award from The Anglophile Channel (image right)!

But the outcome of TORN’s Final Four fan voting could produce some interesting final matchups.

So who are your favorites for the final pairing?  Here is a little poll by Grati:

And here is the wonderful The Hobbit: The Desolation of Smaug original song by Ed Sheeran, “I See Fire”, to enjoy while you ponder your poll choices:

Huge thanks to Mirella for sharing TORN’s Final Four link!  My email notifications are very slow these days.  Ha!

P.S.  The next “N&S:  JTLL” story post will be Saturday  instead of Friday–since I’m in night meetings until Friday.