Sunday, The One Ring Net (TORN) reported that a teaser trailer for The Hobbit: The Battle of the Five Armies would be released on Monday, July 28th(and the teaser for the teaser below). Thanks to Michaela Servetus for pointing me to that TORN link!

Then after watching the 17 second teaser for the teaser trailer yesterday, I wondered if we 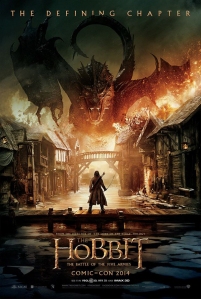 would see shock and awe or mostly fire breathing dragon in the real teaser trailer? The Hobbit: The Battle of the Five Armies initial movie poster that Sir Peter Jackson (right) shared on Facebook also seemed to lean that way.

But, it was anyone’s guess at that point. We all know the bones of The Hobbit tale storyline–which I will refrain from stating to keep this post spoiler free. However, I will say one thing–there is a big nasty fight that goes down. And may I state for the record, that I am a big fan of this third movie in The Hobbit films trilogy’s name change to the most descriptively appropriate eponymous title, The Hobbit: The Battle of the Five Armies! The new name isn’t really a spoiler, is it? Ha!

But getting back to the teaser video for the teaser trailer, the lack of clips showing Thorin

Oakenshield–brilliantly portrayed in the other two films by the exquisitely talented British actor Richard Armitage–made me wonder what secrets were yet to be uncovered in this third film. Would some plot points be emphasized or expanded more than others? Are those appendices getting a work out again? Bard and Thranduil and Gandalf and Bilbo (see his movie poster shared by TORN, right) and the Company of Dwarves and Legolas and Tauriel and others, all must have their due in this final film.

And even if you knew nothing about The Hobbit story’s ending, with one of the writers and producers, Phillipa Boyens, unfailingly stating her being enamored of Thorin’s storyline and how wonderfully Richard Armitage portrays him, I think we’re safe to assume that Thorin will have a big role to play in this last film.

Finally, the revealed teaser trailer for The Hobbit: The Battle of the Five Armies gives us a few clues:

“The Hobbit: The Battle of the Five Armies – Official Teaser Trailer [HD]” by Warner Bros. Pictures

Shock and awe? Oh yeah!  I feel even more certain about Thorin’s role in this third film

with the teasing glimpses of Thorin smouldering–while retreating into the shadows with the darkness of the gold fever dragon sickness overtaking him, and then Thorin taking command again–that we see in this teaser trailer. And then, the closing voice over in today’s teaser trailer is a plea by Thorin Oakenshield (right) to his warrior friends as he brings them together for a common cause a final time, touched my heart with its honest simplicity:

This one line embodies the courage and determination and heartache and inspiration that the Dwarves of Middle Earth have faced together, with Thorin as their leader–and of what is yet to come. My response to Thorin? A resounding yes!

P.S. And now, for your viewing pleasure, some caps I made of the Official THBOFA Teaser Trailer video. You knew I would. Ha!
N.B.  These caps are not necessarily in the order they appeared in the teaser trailer.

Azog and his legions

Bard with the Elven Garrison 1

Bard with the Elven Garrison 2

Bard making an appeal to Thorin

Dwarves on the bridge

Inside the cavernous Erebor Fortress

Legolas and Tauriel see the ruins of Laketown

The Hobbit–The Battle of the Five Armies logo

Wargs on an icy river attack