Posted on January 14, 2015 by Gratiana Lovelace

I want to preface my remarks below by stating that I’m not working on all fingers–that thought is something akin to not working on all cylinders, but then, I was never mechanically inclined and I wouldn’t know a cylinder from a piston. Or, maybe I should fracture it thus: I don’t know whether to wind my cylinder or scratch my crank. Thanks to my hubby for the car engine lesson. Anyway, my index finger has a boo boo.   And I’m typing with a bandage on it.

So, back to embracing my inner cougar. Kkkhhh! I recently glanced at a picture online of the

salt and pepper silver fox–George Clooney next to his young, beautiful, and accomplished bride Amal at the 2015 Golden Globes (right courtesy of Yahoo news). He is 53 to her 36–a 17 year age difference, that is almost a generation.

And I think, what is wrong with this picture?   The answer? Nothing. Love happens–regardless of age. There are several examples in Hollywood of May-December–or even March-December–marriages where the much older man weds the younger woman: Charlie Chaplin and his 36 years younger 4th wife Oona O’Neill Chaplin; Bing Crosby at 30 years older than his 2nd wife Kathryn Crosby; Roy Boulting 52 and Hayley Mills 19; and others, and now George and Amal, you get the idea.

But my question is, where are the scores of beautiful older women and their younger adoring men? In real life, or even in reel life? Ladies, please step forward! More recently, television had series called Cougar Town–which I haven’t seen– with Courtney Cox, who herself was married to a 7 years young man, David Arquette. But I gather that Cox’s character learns to take charge–in a positive reaffirming way.

Yet Hollywood films have not portrayed that gender age reversal in a favorable light–usually casting the younger male as a green or needy younger kept man by the desperate for love and sex starved but wealthy older woman. Here are a few film examples:

Sunset Boulevard (1950), (right) with a 51 year old Gloria Swanson portraying an aging movie queen to a studly (think of his bare chest in Picnic, 1955) nascent writer toy boy William Holden at 32 years old. Swanson is at her cloying best as an increasingly repulsed Holden tries to extract himself from her clutches. Let’s just say that it ends badly–actually, it begins badly, too.

American Giggolo (1980) (right) with a 31 year old Richard Gere and his 48 year old Nina Van Pallandt and a succession of ladies, including a 37 year old Lauren

Hutton; Gere is buff perfection whose self confidence is severely shaken when the ladies he pleasures drop him like a hot potato, not wanting to risk exposure for their dalliances with him, etc.

And in general, the men’s characters did not fare well in these filmic relationships. Holden’s character ended up dead–with Swanson’s character going to jail. As a reversal, Gere’s character almost when to prison when charged with killing another client–but Hutton’s character gave him a between the sheets alibi. And Beatty’s and Leigh’s characters parted regretfully, if memory serves. However the actors, themselves, all went on to successful careers after playing boy toys–with William Holden winning an Oscar in 1953 for Stalag 17–and especially for Warren Beatty who then became an esteemed and multiple Oscar winning and nominated director and actor.

And in real life, we had or have such long married or co-habiting December-May couple examples as: Juliet Mills and her 18 years younger husband Maxwell Caulfield, married for 35 years and counting; Burt Reynolds and the then 20 years older Dinah Shore, the relationship seemed to mellow Reynolds in the public eye, while giving Dinah some zip; and Susan Sarandon and her 12 years younger partner Tim Robbins, though they separated in 2009, they lasted 21 years. And a few examples that I can think of from among my own friends and family with the older woman and younger man scenario working out quite well. No, not me–really, my husband is only 10 months younger than I am.

So for me to be a true cougar like some of the actresses and/or their characters listed above–were I single and in possession of a large fortune, of course, Ha!–I would need a man in his early to mid forties, creating about a 12 year age gap. Hmmm. I wonder who that might be? And I like my men tall, towering over me–my hubby is 6 ft 4 inches to my 5 ft 2 inches. However, the height difference is no obstacle, because good things come in small packages–and in tall ones. Besides, as I always say, everyone is the same height lying down. *wink*

So with such inspiration as this philanthropically minded, exquisitely talented, stylish, and

oh so handsome gentleman, Richard Armitage (right, my manip; and below, my collage), I think that I could fuss and flutter over my younger lover like Vivian Leigh’s character, and also provide the naughty boy a proper alibi like Lauren Hutton’s character. And given the inclination for the man to avoid water–though his roles seem to go the opposite way–we’ll golf or ski rather than soak up the sun by the pool. And, of course, the benefit of having a younger lover–beyond the obvious–is that they come with few attachments, leaving the relationship free and easy going, and mutually satisfying. 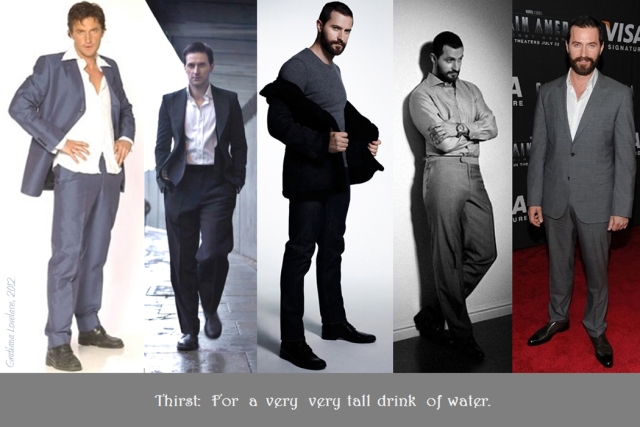 gal, but also because I’m more of a fan of indigo blue. So were I to film this cougar May to December tale of mine–and perhaps with a nod to one of RA’s recent character portrayal’s fondness for a particular gem (right)–it might have a working title of either Cobalt Gigolo, Arkenstone Spring, or Lovelace Boulevard (but without me wearing a turban).

Gratiana Lovelace is my nom de plume for my creative writing and blogging. I write romantic stories in different sub genres. The stories just tumble out of me. My resurgence in creative writing occurred when I viewed the BBC miniseries of Elizabeth Gaskell's novel North & South in February 2010. The exquisitely talented British actor portraying the male lead John Thornton in North & South--Richard Crispin Armitage--became my unofficial muse. I have written over 50 script stories about love--some are fan fiction, but most are original stories--that I am just beginning to share with others on private writer sites, and here on my blog. And as you know, my blog here is also relatively new--since August 2011. But, I'm having fun and I hope you enjoy reading my blog essays and my stories. Cheers! Grati ;-> upd 12/18/11
View all posts by Gratiana Lovelace →
This entry was posted in Cold Feet, Creativity, Fangurling, Flirting, Humor, Love and Relationships, Multi-Character RA, Richard Armtiage, Romance, Something About Love and tagged creativity, fangurling, Flirting, humor, Love and Relationships, Richard Armitage, romance, Something About Love. Bookmark the permalink.