Posted on January 17, 2015 by Gratiana Lovelace 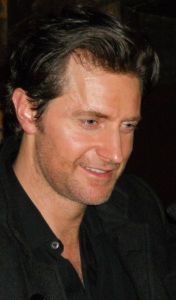 me at different times.

To me, today, this handsome portrait (at right) of the exquisitely talented British actor Richard Armitage at the Pinter Proust play’s after party in January 2014 that rafan2054 tweeted yesterday, is sweetly sexy.

Richard Armitage’s small smile is so endearing. Sighhhh! RA’s smile seems not so much shy here as it seems genuinely courteous. That Richard Armitage behaves so gentlemanly toward fans is legendary.

And Richard Armitage, the man, is effortlessly handsome here with his longer floppy brown hair, noble roman nose, chiseled and stubbled jaw, and that glorious neck (with adam’s apple)! *gulp*

And though I could sometimes get lost in RA’s eyes, his not looking at us through the camera lens at right, lets me gaze unreservedly at him.

I don’t feel the need to look away, as I sometimes do when his eyes are focused directly at the camera in a fiercely smouldering gaze–such as the portrait at left, with RA portraying Lucas North/John Bateman in Spooks, series 9, in 2010.

However, though RA’s fierce smouldering gaze poses stir me time and time again, it is images or portraits like this sweetly sexy image at right above that melts my heart. Sighhhh! 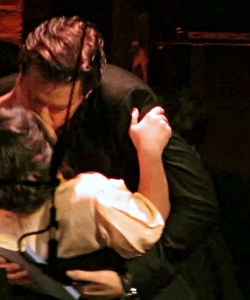 And of course for pure heart pounding animal sexiness, there was that Pinter Proust kiss, right–*trembles*–between the characters Swann and Odette portrayed by Richard Armitage and Lara Hillier, respectively.

Contemplating this kiss with lips mashed together in fevered couplings as tongues explore in eager trespass, the dipping embrace as he hovers powerfully over his lady and almost laying her onto the piano, and his hand with his slightly bent thumb curving around me … err.. her.   Sighhhh!   Well, you get the idea.

See? I have gone and done it. I started out with Richard Armitage sweetly sexy–and then I became caught up in the romance that RA inspires. Sighhhh!

Oh and just as an aside, Richard? I have a baby grand piano, too! *flutters eyelashes*