Posted on April 1, 2015 by Gratiana Lovelace

My eyes have had one of their flare-ups this past week, so my vision has been spotty. And my having only recently been successful in downloading “The Crucible”–in the SD format–it seems rather ironic that I/eye am too tired vision wise to watch it at the end of the work day. Ha! Maybe I’ll get to it this weekend.

My impatience to be able to watch “The Crucible” reminded of that Night Gallery pilot episode directed by Stephen Spielberg where Joan Crawford’s rich but blind malicious woman paid a man for his eyes so she could see for 12 hours–only to have the city experience a blackout when she took off her bandages:

Yeah, I know, violins are playing in the background. Ha! No, I am not rich nor malicious, just vision challenged at the moment.   Ha! Tuesday night as I write this, I’m going to listen to Richard Armitage narrate “Sylvester” by Georgette Heyer (right). RA is a masterful storyteller!

So Wednesday, I think a little exquisitely talented British actor Richard Armitage eye theRApy is what the doctor ordered. Choosing just one image from all of the wonderfully talented Sarah Dunn portraitature of Richard Armitage was not easy. But I love RA’s joyous smile below in this 2014 Richard Armitage portrait by Sarah Dunn–he looks like he is suppressing a giggle. Sighhhhh! 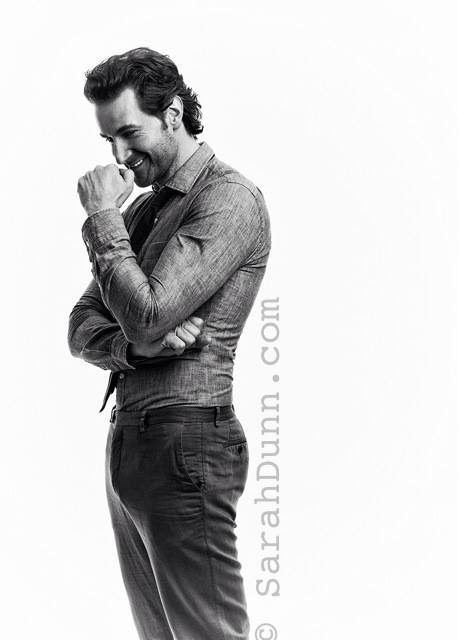 Here was my standard wrap up interview question that I posed:

@OlivierAwards @RCArmitage #AskArmitage What question do you wish interviewers would ask you, but haven't? Then please answer that question.

Update April 2, 2015:  I pasted the Olivier Awards #AskArmitage Twitter Q &A’s in the comments down below.