Celebrating the 4th of July by Honoring the Legacy of Ruby Bridges, “A Mighty Girl”, July 4, 2015 Gratiana Lovelace (Post #779)

For me, celebrating the birth of this nation of the United States on July 4th Independence

Day means recognizing all of our peoples–some of whose independence and freedoms did not come until long after 1776.  And some who are still working on it.

So today, I want to celebrate the courage of a little girl named Ruby Bridges.  At 6 years old in 1960, she became one of the faces of  school integration in the South–as was an earlier group of high school students in 1957, called the Little Rock Nine.

I had heard the story about Ruby before, but not in such detail as the Facebook post shared by “A Mighty Girl” (that they originally posted on September 6, 2014).

So I wanted to share Ruby’s story with you, and with myself, as a reminder that freedoms and liberties are often hard won, at great cost, and only earned through the courage of sometimes the seemingly smallest and certainly the most vulnerable among us–in this case, a little girl named Ruby Bridges, “A Mighty Girl”: 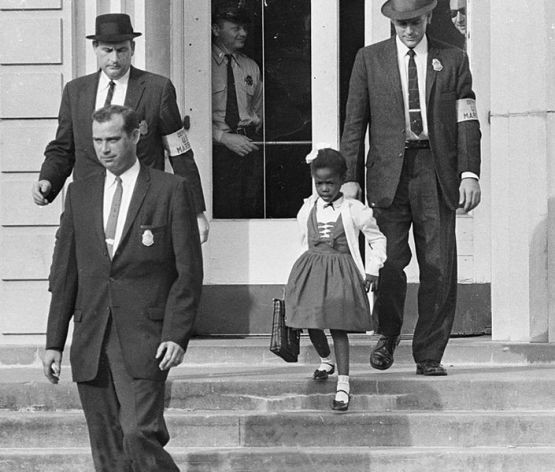 Happy 60th birthday to Ruby Bridges! As a six-year-old, Ruby Bridges famously became the first African American child to desegregate an all-white elementary school in the South. When the 1st grader walked to William Frantz Elementary School in New Orleans on November 14, 1960 surrounded by a team of U.S. Marshals, she was met by a vicious mob shouting and throwing objects at her.

One of the federal marshals, Charles Burks, who served on her escort team, recalls Bridges’ courage in the face of such hatred: “For a little girl six years old going into a strange school with four strange deputy marshals, a place she had never been before, she showed a lot of courage. She never cried. She didn’t whimper. She just marched along like a little soldier. We were all very proud of her.”

Once Ruby entered the school, she discovered that it was devoid of children because they had all been removed by their parents due to her presence. The only teacher willing to have Ruby as a student was Barbara Henry, who had recently moved from Boston. Ruby was taught by herself for her first year at the school due to the white parents’ refusal to have their children share a classroom with a black child.

Despite daily harassment, which required the federal marshals to continue escorting her to school for months; threats towards her family; and her father’s job loss due to his family’s role in school integration, Ruby persisted in attending school. The following year, when she returned for second grade, the mobs were gone and more African American students joined her at the school. The pioneering school integration effort was a success due to Ruby Bridges’ inspiring courage, perseverance, and resilience.   …”

So my heartfelt thanks to Ruby and others for their courage!  Wishing everyone a Happy 4th of July!   Holiday Cheers!   Grati ;->

P.S. And for our enjoyment, another lady who made history, contralto Marian Anderson, singing a favorite patriotic song: