Posted on September 4, 2015 by Gratiana Lovelace 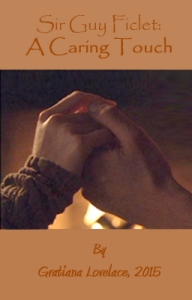 A smiling woman in her mid thirties with a loosely twined brunette hair braid falling casually over one shoulder of her simply ornamented but finely spun cotton night shift and robe walks with graceful noble bearing toward the injured dozing knight. The moon casts its glow upon his handsome sleeping countenance of a strong jaw, piercing blue eyes, and a body of uncommon muscularity and strength.

Sir Guy of Gisborne is such a beautiful charming man–especially when he is silent, she thinks minxishly. And he has still so much of the boy in him that she recognizes–his pouting lips, his uncombed hair, and his devilish smile. Yet, he is a man in his prime and his body is no longer that of a mere boy. Toned muscles ripple powerfully beneath the sheath of his clothing when he walks amongst others.

It seems like she is seeing him anew, though two and thirty years have passed since he was born and she came into his life and household as a young girl, a ward to his family. Her parents had died of the plague sickness. And as a distant cousin, she was welcomed into his family. At first she was shy and terribly confused as any two year old child taken out of her home and thrust into another home would be. But children are adaptable, and her new boy cousin gave her endless hours of amusement.

I kiss each of his hands–marveling in their powerful veining, yet feeling his tender touch. He smiles slightly at me as his bare arms settle over the coverlet at his sides. His broad chest bound tightly with cloth lends little comfort to him. His arms bare, the warming fire in the hearth will prevent him from feeling a chill. I adjust the pillows at his back and bid him to relax into them more comfortably. He does. Then I brush the locks of hair from his forehead and kiss his temple.

He smirks and says that he has not been tended to as well since he was but a child and under his mother’s caring influence. He is teasing me, for well he knows the hold that he has over me. Not even my early and fifteen years long marriage could break it. And then my childless widowhood found me back with him again–under his protection. I respond to his charge that caring is in my nature–and that his jousting injuries warrant caring. Bruised ribs are very painful.

Yet he scoffs, feeling unused to idleness that his sick bed has forced upon him. He tries to sit up further. But the pain at his side prevents much movement on his part as a reminder to him to rest. With a grimace and a low growl, he concedes his currently wretched state. I stifle a small knowing smile. His many moods are well known to me. He was ever thus, beautiful and stubborn.

And I say that I will care for him as long as he needs me. For I feel that it is a blessing that I may care for him–but not that his injury was the instrument by which this renewed closeness has come about. Then his face grows somber as he asks me if I will care for him after he is well. “Aye, My Lord Gisborne, I will.” His face turns to scowl at me. “My Lady, I am not your Lord. Gwyneth, you are my … guest.” We exchange gazes of familiarity–of a lifetime of shared memories as we grew up together. I nod my head in acknowledgement of our special relationship.

Then I lie down upon my feather mattressed cot placed adjacent to the side of his large bed–so that I may tend to him in the night when he needs caring–and I bid him to sleep. Guy closes his eyes and smiles slightly about us sharing a sleeping space as we once did when we were children in the nursery together–my being only two years older than he. I close my eyes and move to rest my hand over his hand as we gently clasp our fingers together. And sleep blessedly claims us both.