Posted on September 17, 2015 by Gratiana Lovelace

As I get older–and ponder making wills–I find that I think of mortality more. That is especially true now that my grandparents, parents, and aunts and uncles generations have all passed on. There is no generation above me. And now my cousin generation is starting to die off. But god willing, I’ll have another thirty to forty years. And hopefully those years will be spent with my wonderful hubby for our 30th, 40th, 50th, and even our 60th wedding anniversaries.   We will be well into our 80’s and 90’s by then. And I can’t envision my life without my husband. He is my heart’s true love and soul mate–my forever love.

(Grati’s edit, right, courtesy of Theatre Mania article) in Miller’s play, The Crucible–set during the Salem Witch Trials of 1692 to 1693–have no such longevity in their marriage due to John’s being killed via execution by the State when he was wrongfully accused and convicted of witchcraft. Theirs is a love story cut short, amputated by harrowing circumstances beyond their control. It is nightmarish to even contemplate. That Miller’s play is a fictionalized account of real people’s lives makes the tale even more horrific–323 years later.

In Arthur Miller’s tale of honor, and of sacrifice, and of love, John and Elizabeth were not perfect people–they were flawed with pride, and lust, and arrogance, and betrayal, and mistrust.   And therefore, the characters seemed even more real. They had had a troubled marriage–John’s lustful infidelity during Elizabeth’s illness, and her insecurity about her worthiness as a woman, and John’s subsequent guilt about his infidelity and her mistrust of him held them both back from understanding each other, from giving themselves to each other, form forgiving each other, and from loving each other.

Elizabeth:  “John, I counted myself so plain, so poorly made, no honest love could come to me! Suspicion kissed you when I did; I never knew how I should say my love. It were a cold house I kept.” (p.127, Arthur Miller, The Crucible, Penguin Classics) 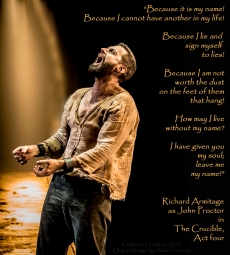 And yet with the very end, with John’s imminent death by execution, their mutual love crystallized for each of them. John knew with every breath she took that his Elizabeth was his true love. And Elizabeth knew with every honorable word spoken from her husband’s lips, when he would not lie to save himself from death (Grati’s wallpaper, right), that she tacitly forgave him because he was her true love–as she expressed to him:
Elizabeth to John: “Only be sure of this, for I know it now: What ever you will do, it is a good man does it.” (p. 126, Arthur Miller, The Crucible, Penguin Classics)

Later, John’s response to Rev Hale’s warning that he will hang: “I can. And there’s your first marvel, that I can. You have made your magic now, for now I do think I see some shred of goodness in John Proctor …” Then Elizabeth rushes to John and they kiss “with great passion”.   (p.133, Arthur Miller, The Crucible, Penguin Classics

Yes, theirs is a tragic love story–because of John’s wrongful death and for Elizabeth realizing too late that her husband was a good and loving man, flaws and all. But their discovery of their deep and pure love for each other was beautifully portrayed in their final kisses by Richard Armitage as John Proctor and Anna Madeley as Elizabeth Proctor in the Summer 2014 Old Vic Theatre production of The Crucible in London, that was thankfully captured on film by Digital Theatre for those of us who could not travel to see the production in person. Thanks to Teresa A for sharing The Crucible gif below that inspired my essay today:

John and Elizabeth are so passionate in their kissing and embracing in this closing scene–that their final moments together are distilled into seeking to capture this moment in time of their pure love–perhaps seeking to make memories to sustain them, to sustain her, and to imprint each other upon their very souls. For in the end, John and Elizabeth became their true hearts and loving soul mates for each other. They are each other’s beloved, forever.

And John and Elizabeth Proctor’s tragic love story makes us wonder, does true love last beyond “the valley of the shadow of death”?  I hope so–because heaven would not be heaven without my beloved in my arms. And when Richard Armitage was asked in a 2004 Independent interview years ago if he believed “that love is forever”, his response was “I’m counting on it.”  And so am I.