Posted on October 11, 2015 by Gratiana Lovelace

Apropos of helping others in need, the exquisitely talented British actor Richard Armitage

(image right, courtesy of M.I. Rogers, from his Best Supporting Actor win at the 2015 Saturn Awards for his portrayal of Thorin Oakenshield in THBOTFA) established a new donations page to benefit “Action for Children” at Just Giving.

This donations page is a further way to enhance the message of Mr. Armitage’s film “Urban and the Shed Crew” –directed by Candida Brady from the book by Bernard Hare–about children living on the margins of society with little hope, but for someone who decides to care. Richard Armitage portrays Chop in the film–as the ex social worker who decides to care. Bravo!

Special Thanks to TeresaA for sharing the link to Richard Armitage’s new Just Giving page to benefit Action for Children! 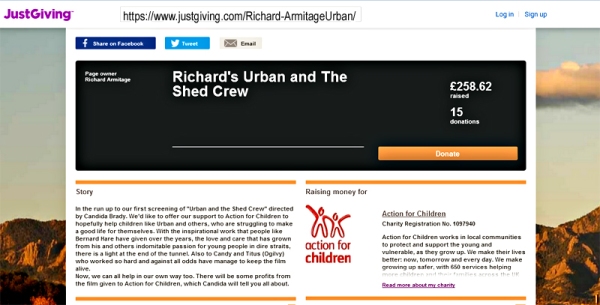 And here is Richard Armitage’s announcement of this new Just Giving page on Twitter (link courtesy of www.RichardArmitageNet.com, Thanks!):

And “Urban and the Shed Crew” will be a featured film at the 29th Annual Leeds International Film Festival November, 7, 2015 . The UATSC film was shot on location in Leeds, England. Here is the official movie trailer: