Posted on October 22, 2015 by Gratiana Lovelace

And Mr. Armitage’s all dressed up formal portraits are divine (Esquire 2013, right).

But I also have quite a hankering for his mussily disheveled scruffy looks as well–with wrinkled or mismatched clothes, hair unkempt, some stubble, and/or shoes optional. Sighhh! 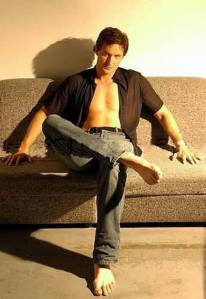 Gloriously glistening muscular biceps aside when RA portrayed John Porter in 2010’s Strike Back (below), sweat doesn’t turn me on–unless that person plans to march right into the shower, etc. Ha! Miss Kitty, this one’s for you. As near as I can tell, the dirt on Richard Armitage’s torso only serves to help define his musculature. Well done there! And the dirt must have also acted like a great sunscreen, because he didn’t seem to tan or burn at all during the filming. Ha!

Only the t-shirt would count as scruffy here. But I’m not complaining. Oh those biceps! Sighhh!

The shoeless feet and wrinkled shirt are so sexy!

And below, is the scruffily handsome Richard Armitage pix that was the catalyst for this post for me. The hair long enough to run your fingers though, the beard needing a trim, the unflattering plaid shirt opened too low and showing a hint of chest hair (purrrr), etc. And though this picture breaks my preferences for liking a shower clean scruffy man–with his glistening sweat being evident–there is always a shower handy somewhere. Ha! And Richard Armitage’s mirthful smile and dancing eyes are oh so appealing. Sighhhh!

So how is a lady supposed to concentRAte with all of this Richard Armitage handsome scruffiness around? NOT! Ha!

Image thanks not hyperlinked above are to: Eagle Mother,  Laura D., Marianna, RAFrance, RANet, and Velvet as noted in each picture’s filenames!

Gratiana Lovelace is my nom de plume for my creative writing and blogging. I write romantic stories in different sub genres. The stories just tumble out of me. My resurgence in creative writing occurred when I viewed the BBC miniseries of Elizabeth Gaskell's novel North & South in February 2010. The exquisitely talented British actor portraying the male lead John Thornton in North & South--Richard Crispin Armitage--became my unofficial muse. I have written over 50 script stories about love--some are fan fiction, but most are original stories--that I am just beginning to share with others on private writer sites, and here on my blog. And as you know, my blog here is also relatively new--since August 2011. But, I'm having fun and I hope you enjoy reading my blog essays and my stories. Cheers! Grati ;-> upd 12/18/11
View all posts by Gratiana Lovelace →
This entry was posted in AttRAction, Beauty, Fangurling, Graphic, Humor, Richard Armitage, Sexy, Something About Love, THUD Thursday and tagged AttRAction, Beauty, DistRAction, fangurling, Graphic, humor, Richard Armitage, Sexy, Something About Love, THUD Thursday. Bookmark the permalink.