Posted on November 5, 2015 by Gratiana Lovelace

Have you ever felt like life was whirling around you and you’re just a passenger on the train? I know, I’m mixing my metaphors, but you get the idea. Between work, home/hubby, and blogging/writing, etc., my life is very full. And prioritizing which must do item has to come before the other must do item can be a challenge. And then bemusedly, I wonder “What Would Richard Do”. Here are some examples where my life and the exquisitely talented British actor Richard Armitage intersect–what we affectionately call, Richarding:

1) Paying bills–It would be so much easier if they were all on the same pay schedule, rather than spread out throughout the month. Then I could pay them all at once. Right? Of course that presumes that the paycheck arrives first. Like most people, we live paycheck to paycheck. But with the overtime I worked over the Summer, and no recent cash depleting emergencies lately (*spits three time*)–we got a loan for my hubby’s recent dental

adventures in multiple root canals–we actually have a little cushion. It’s not a big cushion (right) , just one with a small ruffle on it. But the cushion allows me to ponder paying bills as they come to me. So about every 2 weeks–since the bills are not on the same due date schedule–I go through my list of bills and pay them, online processes mostly–saving an electronic note in my meticulous bill topic folders. *rolls eyes* I know, I am far too organized.  Of course, we still have one outstanding medical bill–for an anesthesiologist that they foisted upon us as a separate charge (Grrrr) for a diagnostic test–but we’re almost caught up there.   Snap! I’m thinking that Harry Kennedy, the suave accountant lover in The Vicar of Dibley, would applaud my hubby and I having a little cushion–and my bills organization. See? Harry is reaching into his pocket to give me a prezzie. Of course, this is a different Armitage pocket than what has been giggled about recently.

2) I am not a doormat, people! Sometimes, I think I need to reread some of the seminal–no not that kind, get your mind out of the pocket–2nd wave feminist writings about self empowerment. How does my polite and courteous attitude with others translate into someone thinking that they can bull doze over me and harass me because they’re having a bad day and I look like a good target to vent at? I’ve got two words for them:   post menopausal. Okay, that’s a phrase, but you know what I mean. I have reached an age where someone sneering that my 8.5 foot by 10 foot office is a closet is not okay–especially since she has never even seen it. Sure, my office is tiny compared to other people’s offices–I work at a non-profit public university. But it’s mine, it’s private, and it has a storage closet inside of it. Really, I think that the gal was in nicotine withdrawal since the restaurant we ate at was smoke free–as all are now. And in another instance, this time of a pampered prince, you want me to go out of my way for you the next time, fella? Then learn your manners and say please and thank you. Your fingernails on a chalkboard ungrateful entitlement whine is not becoming to you. Of course with the smoking reference in the first example, my mind goes to John Thornton in North & South. “Stevens!” (my cap, episode 1, below): 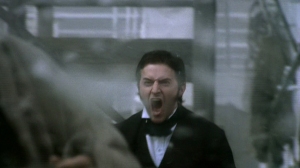 3) Finally, I’m still ruminating about the next chapter of my “Thorin’s Journey: An Unexpected Love” story that I’m currently serializing. I want to conclude this story soon as a short story–maybe within 1 to 3 chapters. I’m trying to be under 50 pages total, if possible. Not the least of which is I have some holiday stories that I want to serialize. But that means that I have to tie up several of my Thorin fic subplots–and I’m still thinking about them. So rather than piffle something out for a Thorin fic chapter post, I’m hanging back and letting my Middle Earth muse rest for a bit. And I’ll try and put a new chapter out over the weekend when I will have more writing time, and when my eyes have had a rest. Double vision is dogging me more in the evenings since my eyes are so computer intensive during the day with registration, scheduling, budget, etc.  Weekdays just don’t afford me much writing time–with only two to three hours at night for writing before bedtime.

And my usual method for being stalled writing wise is to turn to another story of mine and work on it. And that is what I am doing. So I have two regency stories and one contemporary mystical story that I’m working on intermittently along with my current Thorin fic. Each of these alternative stories are at about 25 pages so far.  And I’ve even drafted a story cover logo for the contemporary mystical story. Ha! But then, I illustrate as I write to help me visualize my stories. Again, I have to return to WWRD–and not a Richard Armitage character for inspiration this time, but the man himself. He seems indefatigable–going from one project to the next with barely time to rest in between. The picture below is from April 2015 at the Toronto Airport as he was heading to Ireland to film “Pilgrimage” (image courtesy of Armitage Global). I need to get me some of those red power socks of RA’s. Ha! 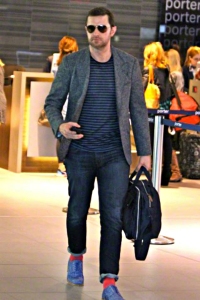 What Would Richard Do? Keep going on to the next project–picking projects that are meaningful to him in some way. And that’s what I try to do, I write stories that I want to read. They might not all catch on fire with readers like my fic “N&S: John Thornton, Love Lessons” did–with over 76,400 reads on Wattpad alone, probably close to over 120K counting both platforms–but that’s okay. Some stories I write, find their audience later. And the fact that people are reading my stories and essays here on my blog and on my Wattpad site long after I initially serialized them is a sheer delight and quite humbling to me. Thanks so much, everyone! I really really appreciate it!

So what brought on my ruminations/reflections today? Actually, it was a post from the Me and Richard Armitage blogger Michaela Servetus (Thanks!) reflecting on several things, herself.   Below is her post link for you to follow, and my comment that I made to her about it.

A good list of insights, there. We can only do what we can do–the rest is gravy, or chocolate, if you prefer (I do). And there will always be some people who want more, but give less.

And I think the best thing we can do for our students is to empower them–“teach them how to fish”. College was the time when I learned major life lessons of self reliance and independence in making choices. It has served me well.   And I try to impart that “you can do it” attitude to my students. And I encourage them to never stop trying for a goal that they want.

It’s not a mind set of “failure is not an option” that some students think/know that their parents have told them–where success is the only acceptable outcome.   It is “You failed? So what have you learned from it? What would you do differently, what would you do the same?” And they have to learn to redefine success and to redefine failure for their own lives–and not impose others’ viewpoints on themselves.

P.S. And I have to ask, is this the “original” Pesky? Or is this a new age Pesky that inherited the mantle?

10 Responses to Thursday’s RAndom Thoughts: What Would Richard Do? November 05, 2015 Gratiana Lovelace (Post #824)