Posted on January 22, 2016 by Gratiana Lovelace

Sometimes a confluence of events causes me to reflect upon my life. What follows are a few of my reflections.

I attended a university retirement reception Thursday. The room was bursting at the seams with the gentleman’s friends and colleagues—including myself. He has been much lauded throughout his long career—and deservedly so. And he still has much of his life left to live, but he wants to do it on his own terms. He wants to pursue his artwork, travel the world, and spend more of his time with his family. I will remember his warm smiles and his can do attitude. I also have several decades of service and contributions made in my department. Yet, I still feel young and can’t envision retiring yet—even if I could afford to in the future. I enjoy my work with and for our students and my colleagues.

Recently, I was invited to Chair the committee for a community organization’s education award scholarship. I have served on that committee since winning one of those award scholarships several years ago when I was studying for my doctorate. I’m ABD, but finishing seems out of reach for me with other demands upon my time—some of those demands are of my own creation, and imagination with my fiction writings, rather than doing academic writings. You see, my dream changed to being a storyteller. Yet, I can help others with their own education or recareering goals via this committee. So I accepted the task of being the committee Chair. I have chaired various committees over the years, so it is not a daunting task for me. And hopefully, I can aid in making the award application review process less painful for the committee—so we can focus on the joy of helping six to ten women with their pursuing their dreams.

Both of the previous examples were career or community service related. And like the retiree, I also aspire to goals beyond my career/job and community spheres. I write stories, doodle graphics, blog, and chat with new found friends around the world. And that talented and handsome British fella Richard Armitage–below as Sir Guy of Gisborne on this Guy Day Friday in a masterful painting by Yennefer Ice (thanks for link from Teresa A!) that captures the actor’s portrayal of his character’s anguished soul–is certainly a big part of that.   And all of this is personally satisfying to me. 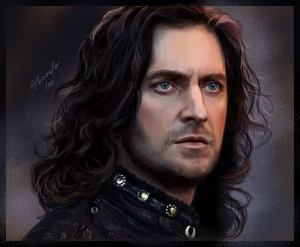 But where I live in my heart—day to day—involves three flesh and blood, corporeal beings. Two of them are furry—our doggies. With our little girl doggie helping me with my exercises by laying her head on my stomach for added resistance. Ha! She just wants to be with me. And if my focus is not entirely on her, it can at least be partially on her. Our older male doggie is more taciturn—wanting love and attention in small doses. Once he reaches his fill, he steps away and returns to his cushion. He used to be my couch companion when we first adopted him. But now at 55 pounds, our male doggie has ceded that right to our smaller 23 pound girl doggie—albeit grudgingly.

However, of course, my true heart lives with and for my husband. After almost 28 years as a couple—26 of them married—we have perfected the art of the everyday of our lives. Well, maybe not perfect, but it works. That is, until something doesn’t work—like our master bathroom light fixtures and my counter side’s electrical outlet (update, at least my electrical outlet is also now working). They just went pffft Thursday. Since my husband’s bathroom counter side electrical outlet on a different bathroom wall still works, it must be that the lights are on a different circuit. But no amount of circuit breaker flipping seems to get the light fixtures working. So, we will have to call an electrician—in a couple of weeks after we get our tax refund. Until then, we’ll adapt to using natural light—and wishing that we hadn’t taken out the bathroom skylight in our home’s design plans, because I didn’t want Google Earth to get an eyeful. Ha!

And it may sound crazy, but even with electrical issue annoyances, we are blessed. We love each other and we are best friends. He is tall and can change ceiling light bulbs without a ladder. I am short and demanding. Ha! We mostly agree on issues, or we eventually convince the other that he was wrong and I was right. *wink*

With regard to world issues, neither my hubby nor I are too concerned that the Anglican Communion threw their toys out the cot, and decided that our American Episcopal Church as a body politic couldn’t play in their sandbox for three years—because they label our church’s inclusivity on the issue of universal marriage access for committed and loving couples as being not “uniform” and not “conforming” to their practices. To that I say, we have our own sandbox—formed over 240 years ago. So there. *raspberry*

Yet as my age advances, I have a greater sense of my own mortality. Will I live 38 more years to 94 as a recently deceased family friend did? My grandmother lived to a little beyond that when she died 34 years ago today.  And with people my own age or a dozen years beyond that age dying, I want to savor every moment of my life—being present as my life unfolds with the good and the annoying, with less of the latter please. I have few regrets, and those that remain are consigned to a bin labeled Not in My Power.

So, I focus on what is within my purview, and pursue it with gusto—such as recycling my hubby’s alarming stockpile of plastic containers that were formerly product packaging. And I am trying to be less accepting of my arthritis’ mobility limitations by going to physical therapy to try to limber me up and increase my endurance and strength. And I continue to embrace change as being inherently good—even if it turns out that it isn’t—because I am tired of the same old thing. To try something new and not having it turn out as we expect nor as we hope, is not failure. “The failure is in the not trying.” Someone else said that. But I’m too tired to do the meticulous referencing on that to do it justice. And I’m typing this and building this post on my new computer—which I’m still getting a feel for. So please feel free to let me know about the quote.

So I will close with the Twitter post by Laura D. (Thanks!) that sparked my musings here–vis a vis the Keats poem:

Our lives are like a butterfly, living gloriously for but a short time in our universe. So let your butterfly wings fly and soar—as I will do with mine.