Posted on January 31, 2016 by Gratiana Lovelace

Thanks to RANet (www.RichardArmitageNet.com) for sharing

the exquisitely talented British actor Richard Armitage’s (right
at Comic Con in 2015, via Terri) Twitter link for an
Irish review by Scannain about his upcoming Irish produced film “Pilgrimage”  :

Pilgrimage was filmed in Ireland and Belgium beginning in April of 2015.  So with these beautiful locations, Pilgrimage’s vistas are sure to be lush and painterly—based on the images released so far.  Above in the tweet is a Pilgrimage production still shared in the Scannain article that showcases the breathtaking scenery.

In the film Pilgrimage , Richard Armitage (below at right front; via Scannain) portrays the character Raymond De Merville–a nobleman in 1209 who is not necessarily noble.  Referred to in the Scannain review above as “misanthropic”, De Merville is the antagonist who wishes to thwart the monks reaching Rome with their holy relic.  The Scannain review refers to Richard Armitage’s character Raymond De Merville as a “misanthropic knight”. 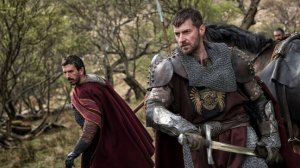 With a misanthrope being someone who has contempt/hatred for other people, perhaps

But seriously,  Richard Armitage has portrayed several hard driving (and moody) action adventure roles—most recently with his 2015 Saturn Awards winning portrayal of Thorin Oakenshield in The Hobbit:  The Battle of the Five Armies (2014).

And, of course, actors always seem to think that baddies are more interesting to portray.  So I can see the appeal for Richard Armitage in tackling Raymond De Merville in the film Pilgrimage. And with Richard Armitage’s characteristic immersion in his character portrayals, I’m looking forward to seeing how he shades and nuances his portrayal of the character.  Will there be some angst to explain—if not to excuse– De Merville’s actions? One wonders at the possibilities.

And for Richard Armitage’s fans such as myself, we get to see him in Pilgrimage  wearing armour and leather, wielding a sword, riding a horse, and hulking around in a cape/coat again.  Who needs Marvel Comics super heroes when we can look to historically accurate non spandex wearing knights in armour?  Even if they aren’t particularly shining with virtues!  Give me almost real men any day.  Ha!

For what purpose, Richard Armitage’s character Sir Raymond de Merville acts against the monks transporting their holy relic has not been made plain. And the significance of the relic has also been shrouded—pun intended—in secrecy.   So we’ll have to see the film to find out.  And here’s hoping that the possible 2016 release date for Pilgrimage will be sooner rather than later.

The Pilgrimage filmmakers are teasing us—and quite successfully on my part.  And fan made Richard Armitage artwork related to the film Pilgrimage is already being shared as fans eagerly await the release of the film.  Thanks to Fernanda Matais for Tweet sharing FMPM’s beautiful fan made wallpaper collage! 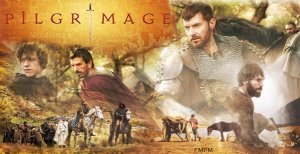