Posted on April 8, 2016 by Gratiana Lovelace

I’m always searching for the right images with which to illustrate my stories.  But sometimes, an image begets a story all on its own.  I find the latter to be the case with the two recently shared production stills from the EPIX series “Berlin Station”—with the series to be broadcast in Fall 2016.  The images evoke something unbidden in me—a desire to know the story behind them.  They are meant to tease us into being intrigued about the story.  They succeeded—especially the first image (below): 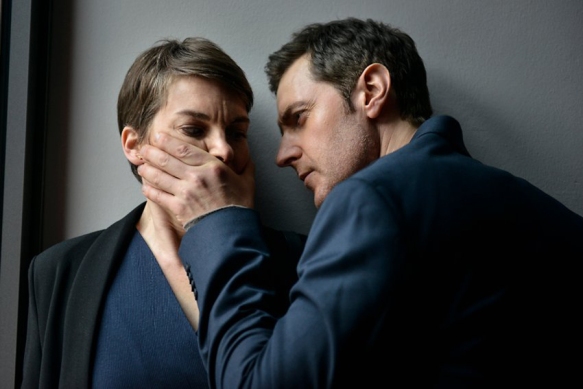 The positioning of the characters in the image above seems rather visceral to me—raw, tension filled—with Daniel exuding almost a feral like quality of the animale in

his masculinity.  Whereas the nearly as tall as he, Ingrid with her short cropped hair makes her seem no nonsense—almost androgynous.  However another portrait of the actress Victoria Mayer before taking on this role–with longer hair and softer lighting–lends merit to a sense of her being a natural beauty (right), with her almond shaped eyes, sweetheart shaped face, and her full pink lips. Whereas, her beauty/femininity seems muted in her characterization of Ingrid.

And Ingrid’s rigid stance in her being captured by Daniel seems to me to be frozen, almost prey like—as if she lacks the agency to effect her own escape.  If, indeed, escape is her goal.  But is Daniel the predator and Ingrid the prey?    In her stillness, I see a match to the rabbits unwisely wandering into our dog filled back yard–with the rabbits standing rigid, as if to cloak themselves in invisibility through their lack of movement.  And then our dogs race to pounce and the rabbits flee.  Yet, Ingrid is not fleeing from Daniel. Not yet.

I wonder further what is the context of this scene?  Is CIA spy Daniel attempting to silence the German reporter Ingrid from divulging classified information—either in dominance to protect his mission–or in concern for her protection?  Her wary gaze seems to suggest the former—dominance, or of Daniel at least being over bearing. His gaze being almost a scrutiny of her person, of her intent.  And yet, there is no struggle on her part.  She does not try to pull away, nor even claw at this hand upon her face, muting her response to him—let alone, she does not raise her arms in her own defense.  Unless, defense is not needed by Ingrid.

Ingrid seems to be waiting to see what Daniel will say, what he will do.  And her eyes 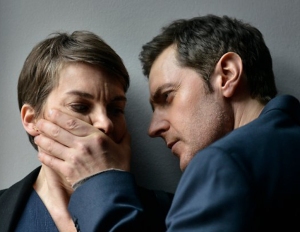 tellingly look at his lips, not into his eyes. Could this coiled power and dominance by Daniel also be tinged with a sexual energy?  I also perceive a sexual tension between them in the closeness of Daniel’s face to Ingrid’s face.  His lips being slightly parted, rather than firmly pressed together in a firm line of anger or determination.  And I perceive a sexual tension in his gaze that looks at her averted eyes, perhaps him silently willing her to look up at him, into his eyes.  He also looks desirous.  Does Daniel wonder what Ingrid would feel like were he to fully cover her body with his own body—in a less vertical manner?

And Daniel’s body is barely half covering/half shielding Ingrid’s body—certainly not overpowering her.  He is not pinning her to the wall—and she could easily move away from him.  And it will be her choice to stay or to go.  Her choice to do Daniel’s bidding—or to suggest that he do her bidding.  And to me, though Daniel’s gaze is intense–and his hand over Ingrid’s mouth is forceful–his gaze also suggests something altogether different than mere dominance or lust to me.  Daniel looks intrigued to me.  Does he wonder if he can trust her?  Will she comply with his orders/requests as he carries out his mission?

Finally, with the colors of the actors’ clothes—both costumes being in medium dark blue shades—they seem to suggest to me an affinity or association between the two characters.  They blend together well—no harsh contrasting colors, nor patterns, nor textures.  All is pleasing and harmonious—an interesting choice given the tense feeling of this exchange.

Personally, I’m back to thinking … all of the above regarding my perceptions about this scene still—with me leaning a bit more toward Daniel removing his hand and covering Ingrid’s mouth with his kisses.  Sighhh!  Oh to be a German reporter under the intense gaze of an American spy.