With Hitchcockian spell binding suspense, EPIX tantalizes us about its new spy show

With the trailer at a mere 30 seconds, less is definitely more.  The trailer makes me want more—of Berlin Station.  From the pounding background music that sounds unnervingly like a hammer hitting an anvil in rapid rhythmic strokes, to the purposely jarring quick cut scene clips of key Berlin Station  scenes and characters–portrayed by Richard Armitage,  Michelle Forbes, Richard Jenkins, and Rhys Ifans (below)–this storytelling feels like a fine vintage old school film noir—with no blood or guts spilled on screen, but with plenty of subtle hints of tensions and menacing danger to come.

And yes, as my dear friend Kitty pointed out, Richard Armitage—portraying U.S. spy man Daniel Miller in Berlin Station—is back on a roof top (below, my cap).  *trembles*  Have I mentioned that I’m afraid of heights?  So the several shots from the tops of tall buildings were both voyeuristic and shiver inducing for me.  But then, I’m always aquiver when Richard Armitage fills the screen.

Though the seemingly requisite blue photo lens filter (my cap, below top) whenever Richard is on screen—in the Berlin Station trailer and in some of his other projects–I could do without.  So I did! (my edited cap, below bottom) 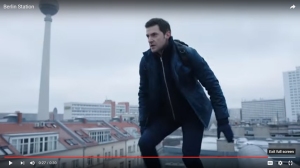 And today is Friday the 13th.  Are there any black cats, broken mirrors, or ladders that we should look out for?  Or maybe we can dispel the superstition with just glance at a tall, dark, and handsome British man?  Hmmm.  It’s worth a try.

Well, maybe there is one cat.  A man with the feline stealth of a cat, being on guard, and trusting no one—a panther prowling the roof tops of Berlin.  Purrrrr!

And Richard Armitage portraying Daniel Miller must find out who the leak is at Berlin Station to complete his mission and go home.  But will he?  Or will he find even more intrigue to investigate?

Here I am eagerly anticipating the ten episodes planned for series one of Berlin Station that will begin broadcasting in Fall 2016, and I am already hoping for a second season.  *wink*

Thanks to the EPIX producers for a fabulous trailer!

P.S.  Thanks to Claudia P. for sharing the Berlin Station trailer vid link!

Gratiana Lovelace is my nom de plume for my creative writing and blogging. I write romantic stories in different sub genres. The stories just tumble out of me. My resurgence in creative writing occurred when I viewed the BBC miniseries of Elizabeth Gaskell's novel North & South in February 2010. The exquisitely talented British actor portraying the male lead John Thornton in North & South--Richard Crispin Armitage--became my unofficial muse. I have written over 50 script stories about love--some are fan fiction, but most are original stories--that I am just beginning to share with others on private writer sites, and here on my blog. And as you know, my blog here is also relatively new--since August 2011. But, I'm having fun and I hope you enjoy reading my blog essays and my stories. Cheers! Grati ;-> upd 12/18/11
View all posts by Gratiana Lovelace →
This entry was posted in Berlin Station mini series, Daniel Miller/Meyer in Berlin Station, Fiction, Honor, intrigue, Michelle Forbes, Richard Armitage, Something About Love, Television, Video and tagged Berlin Station mini series, Dance, fiction, Honor, Intrigue, Michelle Forbes, Richard Armitage, Something About Love, Television, Video. Bookmark the permalink.