I love the riepu10 tumblr collage of Richard Armitage as Gary Fuller in 2014’s Into the Storm as shared by Guylty (below)!  Thanks, Ladies! 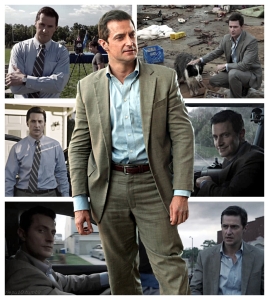 The “Into the Storm” film was shot in 2011 when the exquisitely talented British actor Richard Armitage was 40 years old–five years ago—on a break from his The Hobbit trilogy filming.

Richard was the right age to play a Dad and a high school vice principal, career wise.   He also had the somewhat loping yet stodgy/responsible vice principal demeanor and a Midwest accent down pat—without a false nasal twang that other actors might employ.  He was subtle in both regards to his character’s portrayal.

The film came out in August 2014, after about 50 million dollars in special visual effects were added via CGI.   A bunch of us in the Midwest of the U.S. got together to see the film.  Most were from Illinois, Wisconsin, or Minnesota/South Dakota.  And with an RA lady fan from Florida attending a Chicago conference anyway and joining us, we were from all over the map!  Ha!  Other areas of the U.S. and Canada also did similar RA Fan meet ups to see the movie.

So thanks again to riepu10 and Guy-lty for sharing Richard Armitage “Into the Storm” images that jogged a nice memory for me!

P.S.  And speaking of fan meet ups to see a Richard Armitage film.  Who is up for some RA Fangirl road trips if upcoming Richard Armitage films yet to have release dates start showing in U.S. Cinemas—such as period film “Pilgrimage”, societal critique “Urban and the Shed Crew”,  thriller “Sleepwalker”, and the medical drama “Brain on Fire” —and you live within easy traveling distance of Chicago, which I hope will show one or more of them?  Here are my top two Richard Armitage film hopefuls:

“Urban and the Shed Crew” film still by Alistair Morrison (of Anna Friel, RichardArmitage, and Fraser Kelly), as shared by Director Candida Brady