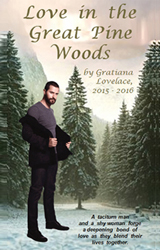 Author’s Content Note: “Love in the Great Pine Woods” is a mature love story with dramatic themes of love and relationships.  It will mostly be at the PG and PG-13 movie levels. Specific chapters or passages may have a further rating of:  L for language, D for dramatic emotions, and S for sensual themes.  And I will rate the chapters accordingly. If you are unable or unwilling to attend a movie with the ratings that I provide for a chapter, then please do not read that chapter. This is my disclaimer.  And as is my habit, I will summarize the previous chapter’s events at the beginning of the next chapter.

Author’s Recap from the Previous Chapter:  The Hidden Lake cottage location for Olivia Delaney Wakeforest’s twins baby shower proved to be a terrifying choice by her sister-in-law Tessa Wakeforest Shoop Delaney as bears invade the cabin’s property.   And Kevin and then also Sam Wakeforest must fend off a very large 400 pound enraged male bear ready to pounce upon a mother bear who it had fought earlier over the mother bear protecting her baby cub bear.  Then Olivia’s water breaks a month early—out at her and her husband Sam’s Hidden Lake cottage

Not knowing that his wife Olivia’s water has broken and that she has gone into labor not twenty yards from him inside their Hidden Lake Cottage, Sam Wakeforest and his brother Kevin are focused upon the two bears before them.  Though an injured bear can often be a dangerous bear, they realized that the smaller adult bear had been in a vicious fight with the larger male bear—and come out on the losing end.  So the brothers did the only thing they could do to save everyone’s lives.  They both shot their rifles at the enraged male bear heading to finish off the smaller female bear.

Standing over the dead male bear, Sam Wakeforest checks the bear’s ear tags for identification.  Not all bears are able to be tagged on the mountain.  But this bear is tagged.  And the code number on the tag indicates the year the bear was tagged, its approximate age at the time, and location.  And Sam knows this bear.

Sam:  “You see that marking between his ears?  This fellow was one of the first bears that I tagged on the Mountain when I returned from the war ten years ago.”

Kevin: “I don’t remember his markings.”

Sam: “No, William was with me.  We had gone into their hibernation cave in mid Winter.”  The best time to tag bears since they are usually lethargic and less of a threat.   “He was not yet an adult bear then.”

Sam mourns the necessity of needing to kill the bear to save another bear’s life and their own lives.  Sam and Kevin roll the dead bear onto a tarp and load it into Sam’s truck bed.  It will be transferred to the State Natural Resources facility in Valley View 60 miles away.  The bear’s body will be autopsied to ascertain the state of its overall health at its death—both for disease as well as nutrition and such.  Learning what this bear can tell them about its life and habitat might help them manage the other bears on Wakeforest Mountain.

Sam closes the back gate on his truck after they placed the dead bear inside.

Sam:  “No. Ha.” Sam shake his head.  “There is no point to naming something that I’m not likely ever to see again in my life time.”

Then the two men turn their attention to the smaller wounded bear on the edge of the forest.  Though the female bear is conscious—the men, as of yet, have not seen the baby bear cub so they do not realize this is a nursing mother—it is in no shape to fight them, nor find its baby bear cub, let alone, crawl away into the woods.

Kevin carefully checks the smaller wounded Brown bear [(2)] for ear tags—which also clue them into the sex of the animal, without them having to endanger themselves by doing a visual inspection should the bear have a sudden surge of strength.

Kevin: “It’s a female—about eight years old.  And it’s nursing based on the size of its teats.  It must have a cub around somewhere.”  Kevin looks around.

Sam: “Ah!  The mother defending her cub from an attacking male wanting to mate with her.”  Sam shakes his head.  “The male bear probably already killed it. Natures’ way—removing competition for its potential offspring’s survival.”  Sam recounts soberly.  Yet why was she trying so hard to get to his property, he wonders?

Kevin:  “She looks to be in a bad way.  Do we relocate her, or put her out of her misery and load her on the truck with the other one?”

Perhaps sensing her life was being discussed, the mama bear focuses her eyes on them.

Sam: “Step back!”  He hisses.  Bears can be dangerous when injured—and even more so when protecting their young.

Kevin: “And just where is she supposed to get it?”  Kevin asks incredulously.  “This is a bear, not a person.”

Sam: “I have my tranquilizer dart gun with me.  I’ll give her the lowest dose—just to make her comfortable and woozy for the hour long trip to the State Natural Resources Facility.  They can patch her up there.  Then in a week or so, we can reintroduce her to the Mountain habitat.”

But then, the Mama bear turns her head and looks at the two men again–in a calm and focused way—as if she wanted to communicate something.   Yet, her being too weakend from blood loss and the pain of her injuries to do anything more.  The look in the bear’s eyes is a bit unnerving to Sam as he goes to his truck to collect his tranquilizer dart gun and set the proper low dosage.

Then Sam gently administers the tranquilizer dart into the female bear’s buttocks whilst he and his brother Kevin stand about twenty feet away.  The bears usually fight the tranquilizer—sensing that something has happened to them—and this bear is no different, as it half heartedly thrashes about for a few minutes.

Staring down at the now much calmer, but still awake female bear, Sam and Kevin Wakeforest do not notice their niece Alice Delaney walk up behind them carrying the bear cub.  Alice had walked out the back door of the cottage after watching what Sam and Kevin were doing through the front windows.  Everyone else is bustling around Olivia and her labor and delivery needs.

Alice:  “Did you kill the Mama bear?”  She asks mournfully.

Sam:  “And no, we didn’t kill the Mother bear.  I tranqed her for the trip to the Natural Resources facility in Valley View for medical attention.”

Kevin looks back and for the between the Mama bear and Alice holding the baby bear cub.

Kevin:  “I think we have a match!”  Kevin gestures to the two bears.

Alice: “Ohhh!  Look!  She recognizes her baby bear cub.”  Alice gushes.  Then she lifts the baby bear cub’s arm and flops it up and down.  “Wave to your Mama.”

Sam:  Taking the baby bear cub from his niece, he admonishes her.  “That will be enough of that, Alice.  Wild animals are not pets—nor do they become them.  They are feral creatures–especially, grizzly bears [(3)] .  I will set the cub near its mother and then maybe she will succumb to the tranquilizer that I gave her.”

Kevin: “Sam?  I’ll take the bears to Valley View in your truck. You can take my truck at the Lumber Mill until I get back.”  The two men swap car keys.  “I’ll drop you there, then you can drive back up here to take Olivia home after her shower.  We can swap back keys and cars later.”

Alice: “But Uncle Sam, what about Aunt Olivia?”

Sam: “Right!  Of course.  Kevin, let me me make sure Olivia isn’t having a panic attack about the attacking bear, and then we can go.”  Though she hasn’t had an attack  in quite a while.

Sam: “What do you mean?” He worries that his wife Olivia is having  a panic attack.

Alice: “She is in labor and going to birth the twins early!”  She squeals in delight—Alice not realizing that her Aunt Olivia giving birth to twins early in a cottage in the forest on Wakeforest Mountain is not the best medical option.

Sam sprints for his cottage—to head to his wife Olivia.

To be continued with Chapter 45

1)  The “Love in the Great Pine Woods” story cover is a composite of two images manipped by Grati:
a)the Richard Armitage portrait is from the 2011 Project Magazine photo shoot and article interview, that was found at http://www.richardarmitagenet.com/images/gallery/Richard/Promos/ProjectMagJuly2011/album/slides/ProjectMag-05.html;
b) the snowy Pine forest vertical image was found on Pinterest at https://s-media-cache-ak0.pinimg.com/236x/62/fa/ff/62faff1253d55f571eb3659cc7661e73.jpg

2) For information about brown bears, you can visit http://www.nhptv.org/natureworks/grizzly.htm

3)  For information about grizzly bears, you can visit http://westernwildlife.org/grizzly-bear-outreach-project/biology-behavior/

Gratiana Lovelace is my nom de plume for my creative writing and blogging. I write romantic stories in different sub genres. The stories just tumble out of me. My resurgence in creative writing occurred when I viewed the BBC miniseries of Elizabeth Gaskell's novel North & South in February 2010. The exquisitely talented British actor portraying the male lead John Thornton in North & South--Richard Crispin Armitage--became my unofficial muse. I have written over 50 script stories about love--some are fan fiction, but most are original stories--that I am just beginning to share with others on private writer sites, and here on my blog. And as you know, my blog here is also relatively new--since August 2011. But, I'm having fun and I hope you enjoy reading my blog essays and my stories. Cheers! Grati ;-> upd 12/18/11
View all posts by Gratiana Lovelace →
This entry was posted in "Love in the Great Pine Woods", Creative Writing, Drama, Love and Relationships, Richard Armitage, Something About Love, Storytelling, Strike Back and tagged "Love in the Great Pine Woods", Creative Writing, Love and Friendship, Something About Love, Storytelling. Bookmark the permalink.