One of the things that I as a fan of the exquisitely talented British actor Richard Armitage enjoy almost as much as his film and tv projects, are the posters that go along with them.  And this past week, we have seen some stunning artwork put out by the production companies for his upcoming Fall/Autumn projects.

1)  Most recently, Richard’s upcoming EPIX produced 10 episode tv show “Berlin Station”—to be broadcast in October/Fall/Autumn of 2016 (via a version posted by Chrissyinwm) gave us an updated banner cover (below) to the “Berlin Station” Facebook page:

The stunning use of the visual image of Richard Armitage’s face–with a brick texture overlay—gives it a gritty edgy feel.  With his coat collar covering half of his face, it also lends an air of mystery and intrigue to his character of Daniel Miller—a CIA analyst sent into the field in Berlin for his first assignment.  “Trust no one” —perhaps, not even yourself.

And as Cyn@Dainty pointed out on Twitter, the cloaking collar picture composition in the new poster is reminiscent of a Sarah Dunn portrait of Richard Armitage (top left)–with my minimal edit of that image using a brick texturing tool in Photoshop (top right), as well as a color 2011 Project Magazine image (below left) that I brick texture edited (below zoomed in, below right) for comparison (color shows better with the texturizing, IMHO):

So just to whet our interest in “Berlin Station Official Teaser I EPIX” again, here is that jam packed (with pounding rhythm) 30 second teaser trailer again:

2)  And for Richard Armitage’s upcoming NYC Off Broadway play “Love, Love, Love” that is currently in rehearsals, new poster graphics showed a willingness to experiment with an overlay and interplay of colors (off of that earlier garishly bright orange logo, despite my trying to improve upon it. Ha!). The faint light purple background and the deep purple in the first section of images really drew me in for some reason.  Ha!

But the overall effect of the color splash is almost like a water color quilt design (example, below left) :

And, I very much enjoyed Fernanda Matias’ improved and more vibrant  poster edit (above right) that included the actors’ names and faces—thereby tying it more to a specific play and being of more visually interesting:

Notice the placement of the purple is still in my initial eye line at top left, but then across from it at lower right is the red dress of the actresses dress—thus balancing the dominant color shades in the poster.  Then down the middle diagonal from upper right to lower left, we have the calmer color tones of blue and green—with a punch of yellow on the play title’s word text.  Fernanda’s poster edit really grabs me—infusing it with personality with her use of the actor’s images.  Brava!

3)  Finally in comparison to one of Richard Armitages older projects (and also a play), I came across this stunning Richard Armitage as John Proctor in The Crucible at The Old Vic in London poster (photo by Jay Brooks) again in my picture files earlier and nearly I swooned. His bare shoulder jutting toward us is so visceral. This image of his exposed shoulders conveys to me, Proctor’s vulnerability–yet also of his strength of his dignity of character. His visage is one of concentration–and stoicism in the face of his disintegrating world around him. I get chills remembering Richard’s stirring performance as John Proctor. Has it really been two years? Sighhh! 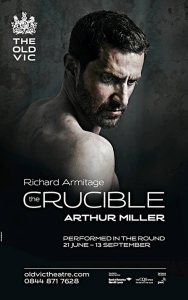 So what do you think about these new “Berlin Station” and “Love, Love, Love” posters?