Posted on October 13, 2016 by Gratiana Lovelace

Facebook kindly reminded me of a wonderful, non glamorous Richard Armitage as  King

Thorin portrait images from The Hobbit: The Battle of the Five Armies that became one of the Thorin Oakenshield’s publicity posters for the film (the dirty gritty looking Thorin in closeup at right).

So in my going back and perusing some of the publicity for the The Hobbit trilogy of films, in general, I realized that the Thorin portraits/posters had gone from glamour shots in the beginning of an idealized and perfectly coiffed and armoured up Thorin, to portraits of the struggling King in Exile trying to keep it together, and/or battle weary by the end.

Some selected publicity character portrait/poster images of Richard Armitage as Thorin (3 images for each year):  2012 THAUJ , 2013 THDofS , 2014 THBOFA appear below (courtesy of www.RichardArmitageNet.com at their Hobbit Stills Gallery).

THAUJ 2012 Thorin as: a young Prince in training, a seasoned warrior, and a mythical Prince/King (with sparkly snowflakes):

THDofS Thorin as: a Young Prince/King, a take no prisoners or spiders Warrior King, and a contemplative King in Exile:

THBOTFA Thorin as:  the dejected and tormented King, a close up of a distrustful King, a determined warrior King

By the close of The Hobbit story in the trilogy of films, Thorin had achieved his goal of restoring his people to their homeland–but he sacrificed himself for it, and to it.  And I cannot help but draw analogies to historical and modern day refugees struggling to find a new homeland where they can be safe, happy, prosper, and rebuild their lives and communities.  We celebrate this valiant struggle in film and in literature, can we do no less in real life?

And below  was one of my favorite fan made Thorin artworks that I saw, by artist called Wisesnail: 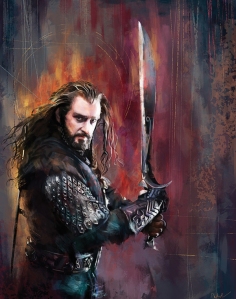 So which of these or other Richard Armitage as Thorin Oakenshield portrait images are your favorites?  And why, if you wish to share?