Posted on October 20, 2016 by Gratiana Lovelace

“The adventures of Kenneth (“The Hobbit” actor Armitage, born to play comedy) and Sandra (Ryan, sublimely witty) begin in 1967, when young people could taste the changes in the air.  “The laws are constantly being overthrown,” Kenneth announces, “the music’s exploding, the walls collapsing.”  Sandra couldn’t agree more. “The world’s going to be a different place in ten years,” she predicts. And off they go into that brave new world.”

“Now here’s a couple who know how to grow old in style. Portraying a pair of soul mates in selfishness in Mike Bartlett’s “Love, Love, Love,” which opened on Wednesday night at the Laura Pels Theater, Amy Ryan and Richard Armitage advance from the ages of 19 to 64 with a galloping satirical wit that pulls you along, happy and appalled, through the decades.”

Thanks to Guillermina Rivas for tweeting the link!:
http://www.telegraph.co.uk/theatre/what-to-see/richard-armitage-shows-impressive-range-in-his-us-theatrical-deb/ 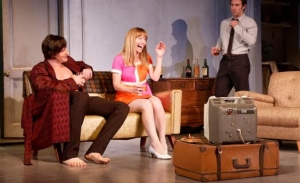 Wall Street Journal:  “Not since Stoppard. Mike Bartlett skewers the Baby Boomers in the best comedy since The Real Thing”

“The Roundabout has missed a trick: “Love, Love, Love” really should have opened on Broadway, and I trust it will transfer there once a theater is free. Yes, it’s gloriously funny, but it’s also an important play, one whose harsh message deserves to be heard far more widely. Regional theaters, take note!”

This is the second review that I have read that waxes poetic about Zoe Kazan’s performance.  Since as one of the “kids”, she appears in Acts 2 & 3, but not Act 1, she seems to have made an impression on the reviewers.

Thanks to RANet for sharing the WSJ link below: