Posted on November 1, 2016 by Gratiana Lovelace

I love this Glady Roland fan made (Thanks!) quad collage poster (below) of Richard Armitage as Daniel Miller from Berlin Station season 1 Episode 3!  From upper left, clockwise, my take on Daniel’s emotions are:  curious/wary, incensed, angered, fearful. Your take?

Daniel Miller (as portrayed by Richard Armitage with a deftly nuanced characterization) in the EPIX produced Berlin Station–just gets more interesting as we go along, from episode to episode.  Daniel seems more conflicted now than in the beginning. Each Berlin Station episode (3 of ten so far) peels back layers about Daniel Miller and his colleagues (Berlin Station cast, below, and crew). And the exquisitely talented British actor Richard Armitage is doing a great job of subtly revealing his character Daniel Miller’s true motivations very slowly—and sometimes in contradiction to what has gone before.  Misdirection—both a spy and a magician’s trick. 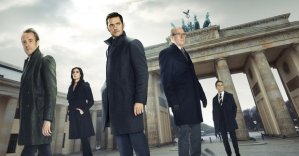 Early on, Daniel came off as–perhaps a fish out of water  (pun intended). And the character was described as a nerdy desk analyst thrust into the field. Now we know that isn’t quite the truth. Daniel is no mere desk jockey—as he decrypts codes messages between Thomas Shaw and Claudia Gartner.  For example, Daniel barely flinches when confronted with the death of the Thomas Shaw courier Claudia Gartner (portrayed with poignant naivete by Sylvia Hoeks)–whom he was charming romantically (below) to find out her secrets– in an  lying in a bloody heap on the pavement of her apartment building courtyard.

Yet Daniel’s anger rises about Claudia’s death when he confronts the journalist Ingrid Hollander/Hollenbeck in episode 2 about her using Claudia to receive the Thomas Shaw CIA leaks (below).

Berlin Station is on high alert because of all of the leaks about CIA operations and agents.  But are the agents concerned about the leaks, what the leaks convey about the U.S., or self-preservation?  We get a healthy dose of self-preservation  being revealed in Episode 3 Riverrun Dry—especially for Station Chief Steven Frost (portrayed by Richard Jenkins) and Deputy Chief Robert Kirsch (portrayed by Leland Orser).

And, Whoa Nelly!  I was not expecting greed to be a motivating factor nor complicating element in this storyline.   Hector DeJeans (portrayed with coiled intensity by Rhys Ifans) is heading toward either a meltdown or having a complete a break with the CIA and him becoming a security chief for one of the bars that he likes to frequent.  And the fact that Hector is getting more action than anyone at the moment—especially in episode 3 with him having a hot sex moment in a car—with a woman–though he is supposedly still worrying about his compromised Saudi contact Faisal (sp).  And one could open up a can of worms regarding sex as metaphor in Berlin Station.

And the women on this show are running through the basic women character archetypes, but with a twist:
1) a whining about Provence wife Kelly Frost (portrayed by Caroline Goodall with palpable impatience for her truculent husband),

5) the encouraging sex in others  journalist Ingrid Hollander/Hollenbeck (portrayed with conflicted righteousness by Victoria Mayer),

7) a steely but soon to be knocked down  a notch Spy Director named Jemma Moore (portrayed with poise and calm by April Grace, I don’t think we have seen the last of her),

8) and now in episode 3 a Western culture leaning young Saudi agent lady (Clair Itani? If yes, portrayed by Zahara Ahmadi with new age abandon) in that hot car sex scene with Hector—which looked uncomfortable at best.  Give me a comfy mattress with sheets and blankets every time.  Ha!

And I have one wish, that the screenwriters would have reigned in their use of the “F” words.  I know of no one who peppers their speech with so much vulgarity.  I get the allusion, vulgar Americans–but that characterization is a generalization.  And the vulgar language in Berlin Station is a distraction for me.

And finally, I’m still not sensing the “American patriot” vibe driving Daniel Miller that Richard Armitage has mentioned in interviews. Berlin Station seems to pound away at the U.S. every week.  Perhaps, that patriotism angle is a “red herring” on Armitage’s part. Hmmmm.  Besides, lest Berlin Station seem to get too preachy and smug about supposed CIA/U.S. tactics, none of the countries mentioned in the story are squeaky clean.  Every country needs to strive to do better. We’ll leave it at that.

I am hoping that more about the Thomas Shaw moral dilemma will be presented in future episodes—not just that leaks are happening, but hoping that the episodes really delve into the substance of why the information leaked  is so important.

P.S. Though thinking about the two shows BS and DA just now makes me wonder about a character mashup—either BADS or DABS *wink*:

1) Irishman Tom Branson fights against what he believes to be injustice—only viewing his side of things.  He is Thomas Shaw.

2) Thomas Barrow (DA) goes to Germany to learn from Hector DeJeans how to own his sexuality—easier to do in the 21st century, of course—and tips on how to undermine people effectively.

3) Lord Grantham feels his life’s work slipping away from him—so does Steven Frost.

4)Mary Crawley brashly and bravely taking over managing the DA estate after her husband dies, finds comfort in the arms of Daniel Miller—who is doing much the same thing and Berlin Station.

5) Matthew Crawley, solicitor, heir to an Earldom, dies too young—say it isn’t so Daniel.  At least give us three season.
etc.

P.S. I signed up for SlingTV at Sling.com—Orange package for $20/month basic channels plus the Hollywood Extra package  (for an extra $5/month) that includes the 3 EPIX channels that have Berlin Station on them for broadcast and playback.  So for $25/month, I have streaming tv and movie options via SlingTV.  This weekend, I even got to watch the film Love and Friendship (2016)—Adapted from the Jane Austen novella Lady Susan.  Snap!  So it is on to Berlin Station episode 4!  Great thanks to Sahraobsessed who tweeted me through the logistics of signing up for Sling!

Gratiana Lovelace is my nom de plume for my creative writing and blogging. I write romantic stories in different sub genres. The stories just tumble out of me. My resurgence in creative writing occurred when I viewed the BBC miniseries of Elizabeth Gaskell's novel North & South in February 2010. The exquisitely talented British actor portraying the male lead John Thornton in North & South--Richard Crispin Armitage--became my unofficial muse. I have written over 50 script stories about love--some are fan fiction, but most are original stories--that I am just beginning to share with others on private writer sites, and here on my blog. And as you know, my blog here is also relatively new--since August 2011. But, I'm having fun and I hope you enjoy reading my blog essays and my stories. Cheers! Grati ;-> upd 12/18/11
View all posts by Gratiana Lovelace →
This entry was posted in Berlin Station mini series, Gifs, Graphic, Gratiana Lovelace, Richard Armitage, Something About Love, Spy thriller, Television and tagged Berlin Station mini series, gifs, Graphic, Gratiana Lovelace, Something About Love, Spy thriller, Television. Bookmark the permalink.