Posted on December 8, 2016 by Gratiana Lovelace

This turtle neck sweater and jacket on the exquisitely talented British actor Richard Armitage (below, via Isabelle, Thanks!) at the 2016 Jane Hotel in NYC photoshoot (photographed by Emilio Madrid-Kuser) really does it for me. 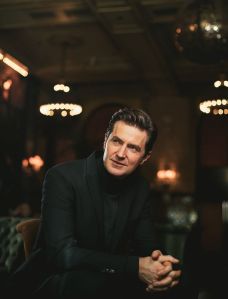 And the muted and balanced symmetry composition of the background–with better lighting promoting great color shadings, especially on Richard for a natural skin tone—and with him seemingly “eagerly” leaning forward and smiling, it is a dazzling portrait of him!  Sighhhhh!  So a very well done to the photographer Emilio Madrid-Kuser!

So when you add the holidays into the mix–as with my little edit below?  Don’t you just want to have a party?  For two?   *THUD* 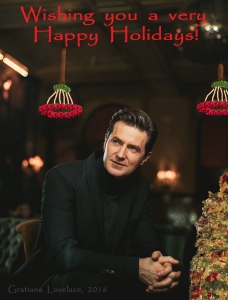 P.S.  I had gushed about another of these Richard Armitage portraits at the Jane Hotel, here.