We have a twofer today for Thespian Thursday!

Such as (initially shared by RA Bulgaria via Teresa A, Thanks!): 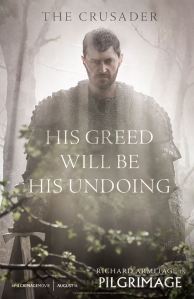 And there is also a stunning Pilgrimage movie poster that features all three leads Tom Holland, Richard Armitage, and Jon Bernthal:

And then … -so maybe, this is a trifecta  (*wink*) … RACentral (Thanks!) shared the link to a new July 19th interview with Richard Armitage talking about his Pilgrimage Sir Raymond de Merville character’s toughest scenes (spoilers)—as well as, his other upcoming roles, and another hoped for Irish historical tale.

And thanks also to fan group RCA-TH for tweeting this de Merville gif that kind of illustrates the character’s world weariness:

With the U.S. release of Pilgrimage being only 3 weeks away on August 11th, I am looking forward to buying the dvd.