Posted on August 2, 2017 by Gratiana Lovelace

Well, when Berlin Station series 1 ended at the end of 2016, we all wondered where the plots and characters from series 1 (below) would go from there. 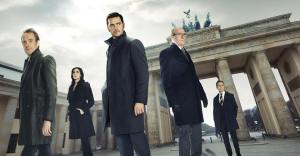 With Hector de Jean (portrayed by Rhys Ifans) exposed as the Thomas Shaw leaker, one

would think that he would slink away in disgrace–never to be heard from again.  But happily, that doesn’t seem to be the case (right, with Richard Armitage as Daniel Miller).  Rhys Ifans is  a detailed actor–as is Richard Armitage.  And I look forward to them having more scenes together as they play off of each other.

The Director of German Intelligence Hans Richter (portrayed by Bernhard Schutz) was whacked by his own people–not for being a gay man, but because he co-opted then masterminded  the Thomas Shaw leaks about CIA incompetence as a personal vendetta, rather than as part of a carefully constructed espionage plot.

U.S. CIA Berlin Station Chief Steven Frost (portrayed by Richard Jenkins) was arrested. Though with that subplot of embezzlement engineering by Frost and Deputy Chief Robert Kirsch (portrayed by Leland Orser)–that fizzled  with only one mention–their greed motivation was never quite made clear.  And with Frost in jail, one wonders what Kirsch will do on his own–without his mentor.

was shot and oozing lots of blood (right) in the first and last episodes of series 1.  But the creators took pity on his fans and showed him alive but seething with unleashed anger in the finale.

Director Esther Krug (portrayed by Mina Tander), will Daniel recover his equilibrium over the mounting betrayals of his girlfriend, his friend Hector, and his other colleagues–who each had multiple and competing agendas?

Well?   Recovery and equilibrium do not seem to be Daniel Miller’s watch words for Berlin Station series 2.  Just a quick perusal (left)  of Daniel’s edgy cropped hair, no suits jeans and sweats wardrobe, and his I don’t give a ____ attitude begins to tell the tale of a man finding more enemies bubbling to the surface of the geopolitical scene than friends.

In the on set interview below, Richard Armitage gives us a teaser about the series 2 geopolitical  plots focusing on world events with inept and corrupt governments in Europe and elsewhere–with the big baddie Russia always looming on the horizon (thanks to RACentral and TeresaA for the video link):

Plots sound familiar?  Stories ripped from the headlines?   I’m sure the Berlin Station series 2 creative team hopes so.  And if they remain true to season 1, in series 2 there will be very little justice to be meted out–just like in real life.

The following cliches come to mind: “The good die young.”  “Every good deed does not go unpunished.”  “The enemy of my enemy is my friend?”  “No man is an island.”  And,  “Be careful what you wish for.”

But it will be interesting to see which governments and politicians crumble–in Berlin Station series 2–and the ripple effect among the characters.

So, we can only hope for more tightly drawn political and human intrigues in Berlin Station Series 2.  I want the basics of film noir:  intrigue, literally foggy dark scenes, with unscrupulous characters, and out of frame violence and sex (letting our imaginations draw the necessary conclusions).

And I hope that the Berlin Station writers will be more creative in their dialogue in series 2 by lessening the vulgar language.  For example, the FU exchange between Daniel and Ingrid in series 1 was nonsensical to me.  If the writers were trying to convey something particular, then  they failed.   As it was, the scene seemed trite and not very imaginative to me.  The writers need to write incisive  dialogue for their characters.  Using copious amounts of vulgar language as dialogue is not edgy and lacks originality, IMHO. 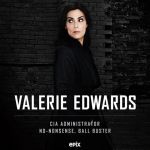 The writing was what lacked here.  Forbes did what she could with what she was given.  So I hope that series 2 will develop her character more.

Sandra Abe (portrayed by Tamlyn Tomita)–the other woman?  Fight back for your own identity!  Though this character is not present in series 2, so that plotline has already been jettisoned.

Kelly Frost (portrayed by Caroline Goodall)–see what looking the other way got you?  And this actress was severely underutilized.  Goodall can play machiavellian characters with

gusto.  Have you seen her Cecily Neville Duchess of York character from The White Queen?  Duchess Cecily’s chilling glare (right) could  refreeze the melting polar ice caps.   If the Kelly Frost character is in series 2, I hope that they give Goodall  a character arc that she can really sink her teeth into.

They could make Kelly Frost an undercover spy mole–and her sniveling husband Steven Frost never even suspected it.  And Provence that she always brought up, is not truly a region of France that Kelly wants she and her husband to retire to–but a code word for some spy plot.  They could even add in a mention to the French Foreign Legion to help with that whole film noir angle.

Patricia Schwarz (portrayed by Claudia Michelsen)–as a part of Daniel’s past, she needs to be developed;  again, this is another actress with great range who should be used to her full potential.

revealing the Shaw leaks?  The antagonism between she and Daniel sizzled most when nothing was said (right). The German equivalent of a Pulitzer Prize for journalism?  And her friend Claudia died because of her amateur foray into espionage.