On Tuesday, August 22, 2017, I/Grati had made my first donation of $22.46 USD to Childline on Richard Armitage’s Just Giving site, in honor of Rihis 46th birthday, via my Change for Charity Fundraiser.

And since we started our Change for Charity fundraising in honor of Richard Armitage’s 46th birthday, his Just Giving site has had 15 visits from people reading my blog.  That’s great!  Whether it is curiosity or developing awareness, it’s great that individuals take the time to learn about or even donate to Richard’s Just Giving site’s charities.

Next week after I get paid (Ha!), I will make a second donation in honor of Richard’s 46th birthday–this time to UNHCR again–based upon the number of Change for Charity  fundraising participants.  $1 for each participant, up to $25.  Since those results are still coming in, I will wait imto; next week two for more people to contact me before I make that final donation.

And by the way, let me give a big shout out and thank you to our Change for Charity fundraising participants so far (with their change collection amounts (if shared so far) and for their support:

Andrea Numellote, participating indirectly with some other fundraising

And with 12 people who have told me that they are participating in some way, that is $12 more that I will donate in honor of Richard Armitage as part of my Change for Charity Challenge—but I will round that up to $25 USD.   But the Challenge total could change if more people make me aware of their participation.   I have pasted my thank you graphic below. Hugs! 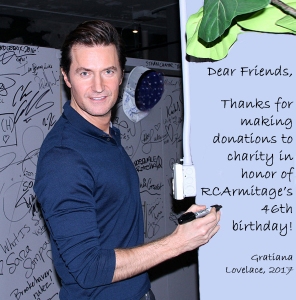 And a very special thanks to fellow lady RA blogger Guylty for her support, encouragement, and participation in Change for Charity!

I can’t believe how the time has flown since August 25, 2011when I began my blogging experiment!  And I continue to enjoy blogging and sharing my stories with you!  I so appreciate everyone who visits, stars/votes, retweets/reblogs, and/or comments on my posts!  I’m glad that you enjoy my essay posts and story posts!

Some amusing post comments that I have received along the way from blog visitors are:

My love for Richard Armitage’s artistic endeavors goes on:

The exquisitely talented British actor Richard Armitage is as active as ever—even more so considering his varied  mainstream theatre, film, and tv roles with other big name stars and critical acclaim and recognition—The Crucible at The Old Vic in 2014 (see below); Urban and the Shed Crew in 2015 (I so want to see the film released widely, or at least on dvd so we can see it);  Brain on Fire in 2016; the NYC play  Love, Love, Love in 2016; Pilgrimage in 2017, Ocean’s Eight in 2018, etc.

Richard Armitage has also done extensive voice work in this 6 year period for adverts and especially audiobooks, such as:  Hamlet Prince of Denmark: A Novel in 2014, Classic Love Poems in 2015, David Copperfield in 2016, Romeo and Juliet: A Novel in 2016,  etc.
Richard Armitage is hugely talented, a chameleon of a performer/actor, immersing himself in his roles to such an extent that we the audience are transported into the storytelling that he shares with us.

And then there are my stories—ficlets, short, long, and very long—29 works that I have shared with you so far.  And there is a backlog of my stories vying to be serialized.  Story writing is an intimate business.  Writers create characters, conflicts and happiness for them to experience, as well as, include pieces of themselves in the writing.  I often feel that my stories are my children.  I hope for their success, giving them support, yet knowing that they will find their way eventually.

So when my stories really take flight in their readership—like my 582 page “N&S: John Thornton, Love Lessons” (with well over 94,300 reads and 1,100 votes on my Wattpad site alone)—it gives me a lovely feeling of having created something that people can connect with.  My next most popular story has been my more recent original historical fiction Regency romance “Encouragement”, with over 25,000 reads and 1,000 votes alone on my Wattpad site.  Finally, two other firm favorites—of mine and my readers—are “Guy’s Rose” (Book 1 of the Sir Guy Trilogy) and “Love is a Choice”. And I like to switch back and forth from historical fiction to contemporary romance.  So a few contemporary romances of mine that are popular are “Love in the Great Pine Woods”, and “Lost & Found”..  As always, the talented British actor Richard Armitage is my muse, inspiration, and lead character in my stories.

I have many more (several dozens) of my stories yet to serialize—I am always thinking of new stories and dashing off several or dozens of pages starting them off.  And depending upon my mood when I have  to choose which story I will share next, I ultimately select the story to share with you that I also want to read and spend time with as I serialize it—from many months to a year in the case of N&S: JTLL.  Basically, I write stories that I like to read –and then share them with you.  That you like my stories also is icing on the cake, as the saying goes.

I do not know what the future will hold for me.  I had health set backs this past year between herniated discs and leg surgery that interrupted my writing flow.  But now that I’m on the mend—I am getting back into a groove of posting new story chapters once a week, as well as new Richard Armitage or other essays about once a week.  So my sharing 2 to 3 posts a week with you is comfortable to me—amidst the other happenings in my life and work.

And my life also especially involves hubby tending, as we are soon to celebrate 28 years of wedded bliss.  Mr. Lovelace (Ha!)  has been a wonderful caregiver during my surgeries and recuperation this past year–and we look forward to returning our home to a less wheelchair accessible status.  And to celebrate, we’re hoping to maybe buy a new sectional couch for our great room–that we can both sit on together and cuddle, as well as doing our respective social media things.  Ha!

The current great room furniture has weathered well over the decades, but with several sofas and chairs being 24 years old, they have nearly worn out the cushions—but the fabric is still sturdy.  Ha!  And we haven’t watched tv for over four years—we stream pbs, etc., for the little online tv viewing we do.  So we can jettison the tv and its tv cabinet to make room for the new couch and some bookshelves, etc.  There is an organization in town that takes donations of used but nice furniture, then distributes them to needy families, etc.

So onwards and upwards on several fronts!  And thanks so much for your past and your continuing support and encouragement of me and my little blog Something About Love!  It really means a lot to me, and I appreciate you more than I can say.

Gratiana Lovelace, Something About Love

10 Responses to Tally of “Change for Charity” Fundraising Efforts in Honor of Richard Armitage’s 46th Birthday; and Something About Love’s 6th Blogiversary, August 25, 2017 Gratiana Lovelace (Post #1091)