Posted on September 8, 2017 by Gratiana Lovelace

The end of Season 1 of Berlin Station in 2016 left me wondering what Richard Armitage’s spy agent character Daniel Miller would do in Season 2—not to mention what the rest of the characters would be up to.

They had found out who the Thomas Shaw leak was—and it was one of them, Rhys Ifans character Hector de Jean.

So friends,  it looks like Season 1’s mantra of “Who is Thomas Shaw?” has turned into “Who is Daniel Miller?” for Season 2.  Works for me!

And thanks to Isabella M. for sharing the link to Cyn Dainty’s lovely Richard Armitage as Daniel Miller collage:

Richard Armitage’s whole look as Daniel Miller in Berlin Station—hair and makeup, costuming, and demeanor, etc.– have changed dramatically from Season 1 to Season 2.  So let’s explore that a bit:

1. Hair and Makeup—whereas Daniel Miller was a young looking man in his prime in Season 1—with a seeming age of late thirties in an almost clean shaven stubbly way (below left and below right). 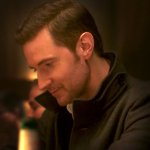 In Season 2 Daniel seems to have aged 10 to 15 years—with his beard and stern face–parking him into an early fifties age bracket (below).  So are we talking time jump for Berlin Station?

2)  And for costume and demeanor, Season 1 Daniel Miller was divine in business attire of suits and ties (below): 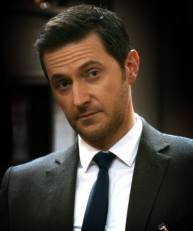 Or sans apparel when working from home (below).

Daniel looks chilly to me—or he has the heat cranked up in his apartment.  Are utilities cheaper in Germany?  Ha!   Either way, I’m grateful.  Those shoulders!  Sighhhh!  *wink*  *THUD*

Whereas Season 2 Daniel Miller really looks the part of a late fifties dad/guy, recently divorced, and unattached in that casual sport shirt and stance (below).

And Daniel comes across as an unamused senior executive after hours in the jacket with no tie (below bottom, again).

Though Daniel Season 2 does seem to retain the ability to charm (Esther Krug portrayed by Mina Tander, below) when he smiles and wears younger looking casual attire.  He definitely looks early fifties below.

And to the aging look in Berlin Station Season 2 of Daniel Miller—portrayed by Richard Armitage—I say Bravo!  He is aging well, like fine wine—full bodied and sexier than ever.