Posted on September 17, 2017 by Gratiana Lovelace 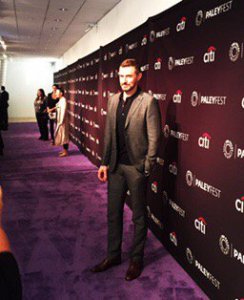 “You are always Spy-licious!  Ha!   Thanks for sharing, #RichardArmitage!  Hope you had a great time!”

Via a Paley Center tweet below, “the gang’s all here”!  Well, several of the principles of the ensemble cast:

The ladies Ashley and Keke were beautiful!  And the guys—Bradford, Richard, and Leland—were well turned out and handsome.  Of course, Richard Armitage’s Brilliant smile dazzles!  And I especially loved the subtle plaid—with aubergine tones—in Leland Orser’s suit!

Pasted below is the Paley Center tweet for Paley Fest–that had retweeted Richard’s tweet Spylish–which is how I found it–in case you want to follow the Paley Center and see all the images, too.

And an interview shot of Richard Armitage while at Paley Fest (via Rita M., Thanks!):

Enjoy!  And no doubt, more images will be shared in the coming days as resourceful fans ferret them out.

P.S.  I know.  My/Grati sharing new blog posts two days in a row?  Shocker!  This occurrence is so rare, the cow is still mooing. Ha!

Gratiana Lovelace is my nom de plume for my creative writing and blogging. I write romantic stories in different sub genres. The stories just tumble out of me. My resurgence in creative writing occurred when I viewed the BBC miniseries of Elizabeth Gaskell's novel North & South in February 2010. The exquisitely talented British actor portraying the male lead John Thornton in North & South--Richard Crispin Armitage--became my unofficial muse. I have written over 50 script stories about love--some are fan fiction, but most are original stories--that I am just beginning to share with others on private writer sites, and here on my blog. And as you know, my blog here is also relatively new--since August 2011. But, I'm having fun and I hope you enjoy reading my blog essays and my stories. Cheers! Grati ;-> upd 12/18/11
View all posts by Gratiana Lovelace →
This entry was posted in Berlin Station mini series, Drama, EPIX Berlin Station, Fun Day Sunday, Gratiana Lovelace, Richard Armitage, Social Justice, Society, Something About Love, Sparkhouse, Spy thriller and tagged Berlin Station mini series, Drama, EPIX Berlin Station, Fun Day Sunday, Gratiana Lovelace, Intrigue, Richard Armitage, Something About Love, Spy thriller. Bookmark the permalink.