Posted on October 16, 2017 by Gratiana Lovelace

I gotta say that my waiting to watch the premiere of Berlin Station Season 2 (below) until its October 15th, 2017 Sunday night premiere date was definitely worth the wait.

The talented British actor Richard Armitage and other cast in the core ensemble deliver in Berlin Station Season 2!  And here’s why (with only minor spoilers):

Not only did we still have Richard Armitage back to reprise his role as spy Daniel Miller.  We knew that the character of Daniel Miller was still alive, but it’s nice to get that confirmation that he’s not just in flashback sequences.  Daniel looks older and seems more menacing in his overall look (below) and demeanor.  Good! 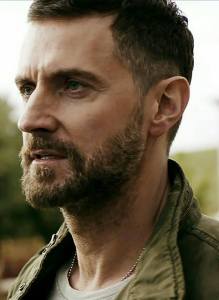 Not only did EPIX  give us the first two episodes broadcast back to back.  Though I really miss commercials for that much needed potty break.

Not only was the view of Rhys Ifans in the back of the Berlin Station Season 2 characters portrait with the characters standing (below), enough of a teaser to hope that Hector and Daniel would team up again.  No spoilers. 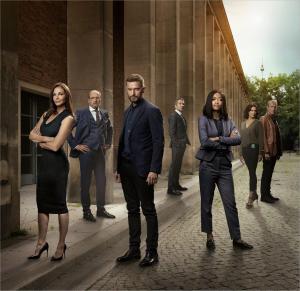 Not only does Ashley Judd as new Berlin Station Station Chief  BB Yates hit the ground running at taking the reins—in four inch high heels no less.  I sense that the determined Deputy Chief Robert Kirsch—like a dog with a bone–portrayed by Leland Orser becoming very intrigued.

Not only does new recruit April Lewis (portrayed by Keke Palmer) give Valerie Edwards (portrayed by Michelle Forbes) heart palpitations when April sticks her neck out, figuratively speaking.

And not only do Daniel and Esther Krug  (portrayed by Mina Tander) have an almost kiss moment in episode 1.  But the ambience wasn’t quite right. The room was a bit … crowded–if you get my drift.

But Richard Armitage portraying Daniel Miller also had the best line of the night, in Episode 1 (the dialogue is paraphrased):

The scene is a dingy and dirty no tell motel where Esther Krug is helping Daniel Miller establish his latest undercover persona by her providing a cadaver for Daniel to pretend to have killed–in the hope of making him seem like a shady character for his latest bad guys targets that he has to infiltrate.

The only problem is that Daniel discovers that the corpse is lacking something when he opens the packing box and the body tumbles out.

Daniel Miller:  “He’s naked.”  Daniel looks at Esther with a combination of disgust and disappointment. Their job just got harder.  No pun intended.

Esther:  “They all were.”  She replies blasely about the naked corpse with no identity that she requisitioned from the morgue.

Daniel:  “Won’t they think that’s a little odd?”  They being Daniel’s bad guy group targets whom he is trying to infiltrate wondering about Daniel having a naked dead guy in his hotel room.

Daniel’s line above was amusing enough—him being worried that the bad guys might think that he has a kinky dead guys fetish.  But wait for it.  The best line of the night is yet to come.

Daniel:  “Does he need underpants.”  Daniel sniffs said underpants, then replies to himself. “No.” And Daniel stuffs them back into his duffel bag.

I/Grati cracked up at the underpants line! Genius!  And Richard Armitage’s deadpan delivery was flawless.  And let it be said that Daniel Miller keeps his underpants to himself—and handy, if not necessarily clean (the sniffing).  Ha!

Both Berlin Station back to back episodes 1 and 2 were great!  And with the clever current headlines Season 2 plot premise foresight, the nemesis for Berlin Station this year is not just themselves—though there is that—but an evil facist regime that threatens to emerge and cause chaos in Europe, and maybe the world.  That’s not too much of a spoiler, is it?

The evil ones must be stopped at all costs for the safety of the world!  Yeah baby!   Daniel and his spy colleagues finally have villains whom they can sink their teeth into.

And now all that Berlin Station spy agents need are some Power Ranger powers to help them overcome their insecurities from their ops being compromised in Season 1 by the whole Who is Thomas Shaw intelligence leaker shenanigans?

N.B.  Thanks to the following for sharing the images above: RA Daily, EPIX, Chrissyinwm, RA Bulgaria, and Durinlass