Posted on November 9, 2017 by Gratiana Lovelace

I am usually of the opinion/belief that having another birthday is not the harbinger of doom.  Quite the contrary.  It’s better than the alternative, right? Ha!

And I state that with no gloomy thoughts abounding. ;)     A friend of mine had a big birthday the other day, which caused me to reflect about my own aging.

There are changes that occur as we age, that we must all grapple with—or adapt to– in order to have a modicum of a happy life.  See if you recognize any of these situations in your lives (as they are in mine):

1)  You drop things—keys, eye glasses, jolly rancher watermelon candies, etc.  And by consequence you’re considering attaching strings to things to halt their fall.  Respectively, this weekend: I’m looking for a key ring carabiner; I’m making an eye glasses neck cord/strap with beads on black leather cording; and I’m looking for a lap apron with pockets to catch the candy (or too loose other food morsels) from dropping after it slips out of its wrapper. Although my bra is a good catcher, my blouses/tops very modestly cover my breasts basket—and thus earrings, glasses, food, etc. bounce off of them on their way to the floor.  ;)

2)  You’re forgetful—but if we write what we want to remember in our cell phones memo pad, that we neeeed toilet paper, we’re saved!  That is if we can find our cell phone when we can’t remember where we put it before we want to head to the grocery store.  And we can’t phone ourselves, because we would need another phone to do that.  And we also wish that we had remembered to charge our cell phone (forgetting to charge his cell phone is a biggie for my hubby).

But there is an upside to nascently creeping forgetfulness.  I often buy quantities of essential household goods ahead—paper products, dog food, milk, and toiletries (not that kind,  ha!)—forgetting that we already have the item (s)—or that my hubby bought some and didn’t tell me.  Then, he is silent!  Ha! More later about that.   And I always have plenty of charge on my cellphone because I habitually charge my cell phone overnight–or anytime I am sitting/lying down in one place for a while—only once forgetting to take my cell phone off its charger and bring it with me, necessitating my getting back in my car after reaching the office and heading home to retrieve it, that happened last week.

3) Your attention span wanes—Or maybe we’re just more discerning about what information or entertainment that we choose to allow into our lives?  Riiiiiight.  Since my hubby and I each listen to NPR (National Public Radio) throughout the day and on our drives home from where we each work–and we hear the same national and international news–I try to gently discourage my hubby from telling me more than three factoids that he heard from the radio news on any given day. He is so eager to share, you see.  Bless him!  Yet, it becomes almost comical when you have someone—my hubby, in this case—telling you/me something that you already know, even when you tell him that you already heard that and knew it.

However, my hubby wanting to discuss said news with me is a different matter. That I enjoy!  Ha!  And who am I to burst my hubby’s bubble about him wanting to be the first to share with me that our state income tax is increasing, or that,  …, uhhh, …?  Oh I forget the other two factoids that he shared with me last  Friday evening as I began to write this post.

Well, here is just one more aging can be fun example—apart from the restaurant meal discounts and such:

4) You make tangential conversational/essay segues that startle and amuse the listener/reader.  One hopes!  Ha!

You see, I also recently realized that next Halloween, I will be of an age to convey/embody the original cougar Norma Desmond (portrayed by Gloria Swanson)  from the 1950 film “Sunset Boulevard” (below)—though Silent Films star Gloria Swanson was a much younger 51 years if her 1899 birthdate is to be believed (Ha!)–but I’m without the gorgeous gowns, hour glass figure (I’m an apple with breasts), jewels, posh mansion, nor the wealth to maintain them:

But I’ll be a cougar only if I can choose my Joe Gillis–which was the “Sunset Boulevard” character originally portrayed by “Golden Boy” actor William Holden–the original Hollywood playboy, if actress Shelley Winters was to be believed–in the person of the talented British actor Richard Armitage (a mature and professional and oh so alluring image of Richard Armitage is found below): 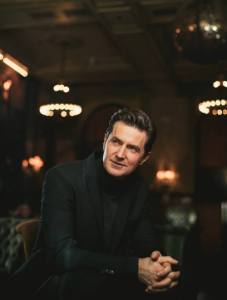 b) And I love this newly found (for me) 1990’s (?) image (below top) of Richard Armitage singing his heart out in true rocker style! And those muscular arms! Sighhh! Though I must say that his hair and facial maturity look to me more like his Sir Guy of Gisborne character in the first or second season of Robinhood circa 2006 or 2007 (below, bottom)—rather than the 1990’s. That tuft of curly hair at the nape of his neck in the Sir Guy image—or Sir Guy’s also errant bang lock–is what clinches it for me.  Ha! 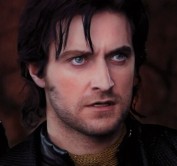 But Richard Armitage is such a chameleon in his appearance, behaviors, and voice for his various acting roles that he can look years  younger simply by shaving a bit (and I do like him stubbled) and/or giving the camera a doe eyed look, with the merest hint of a smile (below).  Sighhh!  THUD!

c) And I like parts that come in threes, so the sexy image below is of a 2016 Richard Armitage portraying CIA spy Daniel Miller in season 1 of Berlin Station, produced by EPIX. Those shoulders!  Purrrrfect!  Sighhh!

So I wish you a glorious—if not a Gloria like—zest for finding your inner (and outer) delightedly aging lady.  And at the very least, I hope that you enjoy your THUD Thursday today!   ;)

P.S.  Image thanks not hyperlinked above go to (in no particular order):  Isabelle, All Things Armitage blogspot, myself, LauraD, Angelika, Kitty, and The Movies Scene as noted in the pictures’ filenames.