Posted on November 16, 2017 by Gratiana Lovelace

I/Grati have been ruminating about the latest episode of EPIX produced Berlin Station (series 2, epi 6) that aired last Sundat night.  But with little free time to devote to getting in onto paper, I was delighted to find an incisive review by Guylty.  So I reblog the beginning of her post below (see the excerpt and link to her blog post).  And then I also provide my comment remarks that I left on her post—as well as an addendum to my remarks.  Enjoy!

“Before I once again get behind with the reviews, I am going to do a free flow review of BS 2×06, foregoing a second viewing and checking up details. The reason: This is a first response – and as such my honest reaction to the episode. [WARNING: Contains spoilers and senseless silliness]

More Daniel than I thought. Because with the hints dropped by Leland Orser and Berlin Station on Twitter, I thought we might be focussing much more on Robert and Steven’s trip to Norway. As it is, their buddy comedy investigations in Norway only take up half of the episode, interspersed with the plot as it involves the other characters. As there are:

BB Yates is getting ready to leave Berlin, having been recalled to Langley thanks to Ambassador Hanes’ meddling. She gets Valerie on board, though, essentially getting her to go rogue by dismissing her from the team, yet keeping an eye on her protégée, April. In an attempt to keep Lena hidden, Hector has actually lost her. She is intent on wreaking revenge on Katerina Gerhardt. Finding her again, Hector seems to be willing to help her with an assassination attempt. Lastly, Daniel has been traumatised by the failed op. Wrecked by guilty feelings, he is not quite himself, and he seeks solace from Esther.” 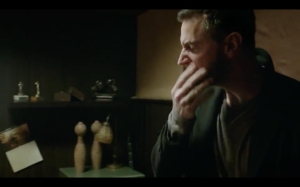 For more of Guylty’s review, please visit her blog at:

“A great review!  Thanks for sharing!  I agree with you on many points–particularly that Berlin Station has more “meatiness” to it this year–with both plots and character development.  Though as you pointed out, that development wobbles a bit here and there.

When I watched Daniel unravel in S2Epi6 that aired last Sunday–and him waxing frenetically nostalgic about Otto Ganz–I instantly thought “Stockholm Syndrome”.  Daniel had been “embedded” with Otto and his daughter Lena—whom Daniel seemed to feel responsible for–having to gain their trust and become one of them.  Yet as an experienced spy in Daniel, wouldn’t he be trained to resist becoming acculturated to his target?

Or, did Daniel’s devastating experience of the car explosion death of his mother as he was growing up, somehow contribute to Daniel’s feelings of loss of Otto, for Lena’s sake.  If they had slanted the reactions of Daniel a bit more in this episode to convey that possibility of explaining his behavior as PTSD–or something else equally as plausible–that would have helped a bit.”

And as a companion/doppelganger to Guylty’s image of Daniel in distress above and in her post, I give you the talented British actor Richard Armitage also as Lucas North in Spooks 9, epi 7, pix 67 and 68 in distress (courtesy of RAnet below, with Grati’s slight image edits):

Richard Armitage covering his face with his hand or hands is a very rare gesture in his emotive repertoire.  His face is so expressive on a microexpression level, that one doesn’t want to cover it up.

I view the hands covering all or part of the face—in any acting/actor example–as both a barrier gesture, as well as, a self-comforting gesture.

A barrier keeps people out, and it also keeps people in—so perhaps Richard as Lucas and as Daniel was trying to dissociate his character from the acts each character carried out, or witnessed, as a way to try to remove himself (Daniel and/or Lucas characters) from the experiences that disturbed each character.  Otto being killed on Daniel’s watch—and beside him in the vehicle, with Otto’s blood and brains splattered all over Daniel was the titular event in Berlin Station series 2, episode 6 for that character.  And in the case of Lucas North in Spooks, Lucas framing an MI6 staffer for his own crime—not as graphic, but Lucas deplored his descent into further dishonor.

Similarly, when a distressing event occurs, people will often seek to find solace and comfort—sometimes with only themselves around to hug themselves, or rock back and forth, and even to cover their faces, etc.–perhaps to calm themselves enough to reflect and make sense of what has happened.  Or if not to make sense of the event, for them to at least endure and live through the distressing event.  In the relative Daniel and Lucas character emotional arcs when the hand covering face gestures appeared respectively, each character was in extreme distress.  So tonally, the gesture seems appropriately deployed in each instance—though the gesture was slightly differently employed for each character by Richard Armitage.

Indeed, the hallmark of Richard Armitage character portrayals is that they are all unique and distinct characterizations and embodiments of a fictional character—emotionally, physically, vocally, etc.  So much so that with a mere portion of an image showing, many, if not most, avid Richard Armitage fans can identify the character and the series year, and maybe even the episode it occurs in.  Ha!