Posted on November 29, 2017 by Gratiana Lovelace

Just what every  Richard Armitage Fan Girl needs:  An image of #RichardArmitage portraying John Porter in Strike Back Origins (2010, epi 6) in a spot of trouble.

It’s unfortunate that Porter/Richard is all tied up below for a scene.  He must be truly suffering in that heat and sun.  The poor man!

Yet Porter/Richard has such wonderfully muscular shoulders and arms on display above are a delightful distraction!   Sighhhh!   *THUD* 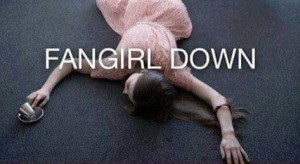 *Fan Girl briefly raises her head off the floor*  But at least Porter/Richard must be wearing some really great sunblock in the blazing sun—SPF500?—because he developed no sunburn, not even a tan line.

Although, it would take some dedicated research to truly verify that supposition—of no tan line.  *wink*  Sighhh!

P.S.  So, we’ll all have to get in line behind the lady in camo below—who seems to be starting the party without us.  Ha!: 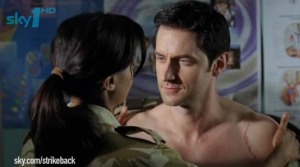 Hope you have a gReAt day!  Cheers!

Images Reference (In order of appearance):

Fangirl Down Image via Meryl Butler.  (Thanks!)

Porter/Richard tied up bare torso image via RAnet (Thanks!):

Porter/Richard’s muscular shoulders are a magnet for the ladies,  image via RAnet (Thanks!):