Posted on January 7, 2018 by Gratiana Lovelace

I love when films like “National Treasure” (2004)—that are designed for pure puzzle solving fun, but also subliminally evoke a greater appreciation for our national history and provide a civics lesson—thus hitting one out of the ball park, with regard to relevancy today about our current national governmental crisis.

The following the Declaration of Independence quote that was featured in the film—and excerpted in the film clip above–really moved me.  Here is that quote again:

“… But when a long train of abuses and usurpations, pursuing invariably the same Object evinces a design to reduce them under absolute Despotism, it is their right, it is their duty, to throw off such Government, and to provide new Guards for their future security. …”  Declaration of Independence

Back to our real lives, we are a nation of laws.  So I hope that our elected officials will act responsibly—and use the laws that apply in this situation.

And for us, as voters, if our elected officials do not act in the best interests of the nation—but they act only for the best interests of a privileged few–then we have a responsibility, too, to vote them out of office, and to vote persons into public office who will serve the public good.

A visually more readable stone engraving of the Declaration of Independence appears below: 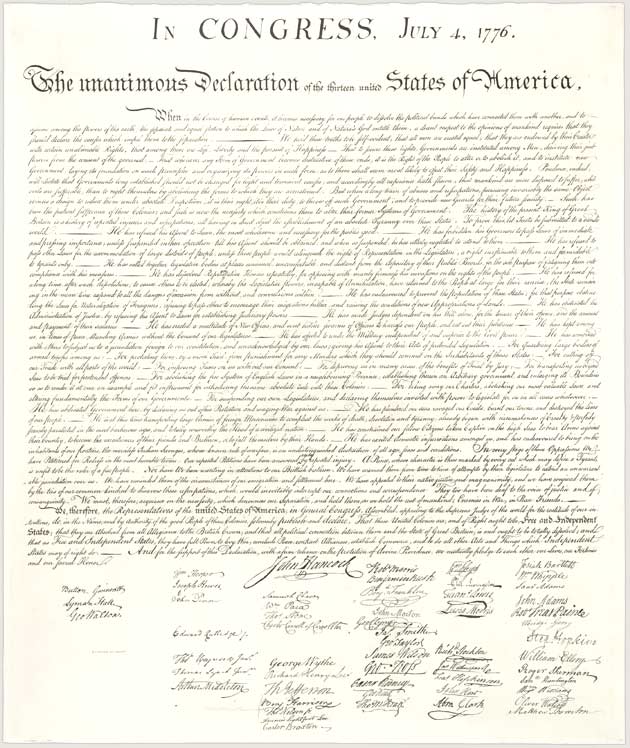 And enjoy the rest of the film, “National Treasure”.  It’s a corker!