Posted on February 18, 2018 by Gratiana Lovelace

My hubby and my Saturday routines have evolved into more separate morning chores (me paying bills, etc. and he working at his overtime job), then us going out together for errands/shopping and then lunch out in the afternoons.  Thrills a minute here in Lovelace Land.  Ha!

However yesterday/Saturday, it started snowing heavily—which dramatically lessened visibility while driving and created slickly slushy driving and walking conditions.  But we were intrepid—or stupid–and we went out anyway.  Ha!

At the a big box store, we found inexpensive clear plastic storage 3 drawer units to use until I can find the tall louvered doors cabinet (below) that I want to buy for linen and clothes storage in the tiny foyer adjacent to our smaller 2nd bathroom that continues to be my handicapped friendly bathroom. 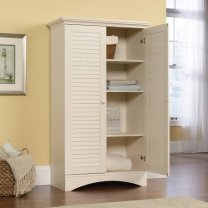 And we were also looking for an ivory hutch and cabinet for our kitchen for more dishes, pans, & small appliances storage to free up counter space in our very narrow 10 foot by 19 foot alley kitchen and breakfast area.

But since the plastic drawer bins are working out well so far by the 2nd bathroom as a temporary measure, we may just buy the tall storage cabinet above for the kitchen—and move into it all of the kitchen appliances that we don’t use on a daily basis, such as the mixer, toaster, food processor, blender, thus freeing up precious counter space, as well as tucking away assorted food storage containers.  So we’ll end up buying one piece of furniture (the storage cabinet above), rather than two.  Snap!

All that home improvement aside and back to the snowy weather, we gave up on eating out after shopping due to the snowy and slushy driving conditions that had worsened during our shopping–and we picked up take home at a drive thru.  A disappointment from our planned lunch date.  But the spending time together is the important part.

So, our weekend has been rather slushy with new fallen snow–not deep, just slippery.  But the snow looks much better on the ground than the melted and muddy mush that had been our backyard of the past day.  Ha!

And the snow coupled with Richard Armitage’s recent new bearded selfie made me think of an earlier 2015 (?) Richard Armitage bearded selfie with snow in the background—I think he was on a skiing trip–from about three years ago (below, image original left via Pinterest; my image edit right).  Those crystalline blue eyes of his are even more vivid against a snowy background  in my edit (below right).   Sighhh! 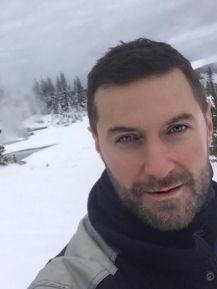 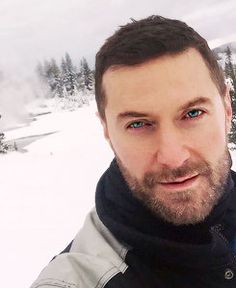 However the usual winters sports are problematic for me.  I so don’t have the ankles for ice skating (anymore)—let alone, skiing downhill.  My skis would need to come with power breaks because my ballast would have me hurtling downhill at a break neck pace—wiping out all in my path.  Ha!   But I would be game to try “the flat” and slower cross country skiing–if I had a certain handsome instructor. *wink*