Posted on February 28, 2018 by Gratiana Lovelace

The best treatments for any rare disease / disorder are acceptance, friendship, education, love, and respect.

For some, their rare disease is visible.  For others, theirs [illness] goes unnoticed.  We NEVER know what someone is dealing with; how a person’s daily routine may differ from ours.

But those routines and special needs do not define the person. 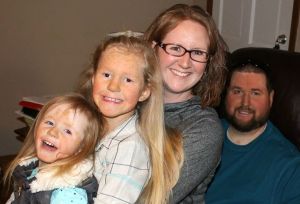 Jessica [Kitty’s daughter and the mother of her two granddaughters in the picture above with her husband and the girls father Trey] is so much more than a hearing deficiency.  She’s a sister, a daughter, a mama, a wife, a musician, a friend, a teacher, a runner, a joy and a delight.  She is smart and funny, wise and goofy; silly, but knows when it’s time to be serious.  None of these descriptions have anything to do with her need for a hearing device.  Her rare disorder is just something that makes her ear different from mine and yours.  That and that titanium post screwed into her skull that holds her hearing device.  Most people aren’t aware of her rare disease because it not visible unless she pulls her hair up. 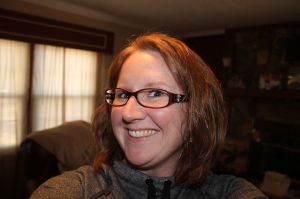 Even though Addison’s, JoElla’s and Trey’s (below) rare disease [of Ichthyosis] isn’t hidden, it doesn’t define them either.  Even though they produce skin more rapidly than you or I do; even though it’s something that most people notice right away, there is more to them than a few flakes of skin.  Trey’s quiet, secret smile that always makes me think he is hiding a mother-in-law joke.  Addison’s (left) non-stop chatter and her ability to chase more squirrels than the best bred rat terrier [is legendary].  JoElla’s (right)  quick temper and frank observations—[and a radiant smile].  These descriptions of their character have nothing to do with skin.  Ichthyosis is just something that makes their skin different.

Rare Disease Day is celebrated each February 28th (or 29th in leap years) provides awareness and shares resources around the world (logo below):

Thank you Kitty for your inspiring and educating words!  You have a beautiful family!  And I applaud your forthright advocacy efforts on the part of those affected by Icthyosis and/or hearing loss.

For a previous guest blog post by Kitty with more details about how Icthyosis  impacts the lives of those who have that disease, please visit/click this related post link, here.