Ever wonder how ladies make it up–or down–long stairways, and not trip or tumble down the stairs in those massive ball gowns or trains, such as Jennifer Lawrence tripping at the 2013 Oscars (image below)? 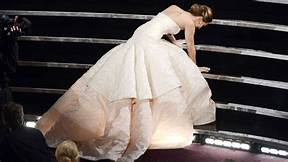 Their escort is Richard Armitage, of course!  The Stair Master King!  Love what Mat Khal has done with this “Ocean’s 8” Met Gala image below!  Keep Calm and watch your steps!  Ha!:

And Richard does look very handsome and elegant in formal wear:

1) such as in this image below from the 2013 Esquire Magazine article and photoshoot (note stairs).  THUD!: 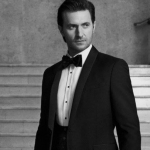 Also, the “twofer” that I referenced above in my blog post title is that the talented British actor Richard Armitage and Anne Hathaway (above in “Ocean’s 8” stairway image) had also costarred as Father and Daughter in “Alice Through the Looking Glass”.

And Richard Armitage’s two other “Ocean’s 8” costars whom he has worked with before are:
1) Helena Bonham Carter (his other “Alice Through the Looking Glass” Daughter);  and,

Richard Armitage also appears below as King Under the Mountain Thorin Oakenshield at the steps at Laketown, is from “The Hobbit:  The Desolation of Smaug” (2013).

It looks like a stairway to Dwarven Heaven, if you ask me.  Sighhh!