Posted on August 8, 2018 by Gratiana Lovelace

When I think of a wild and untamed talented British actor Richard Armitage character, only a man having the guts to wear jewelry clamps on his long temple braids comes to mind–Thorin Oakenshield (image via Angelika, Thanks!) from The Hobbit trilogy of films.  Sighhhh! THUD! 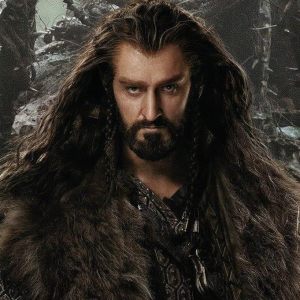 And when Richard as Thorin is in full battle gear and warrior attack mode?  Stand back!  Shock and awe, people, shock and awe!

And thanks to DurinLass for these sample Thorin gifs below!