Posted on January 10, 2019 by Gratiana Lovelace

I found a newish 2018 image of the tantalizingly talented Richard Armitage (below) Tuesday night while perusing the net.  Ah, such beardly goodness—with a tease of neckage!  And he looks great in a suit and tie.   Sighhh!  Enjoy!

And for the record, I’m “Team Daniel”—BS3 is doing like “Where’s Waldo” with their “Where’s Daniel” plot. And though BS3 episode 5 had an expected (by me, based on the opening credits character images)  other character’s return reveal (no spoilers), I’m still looking forward to seeing Richard Armitage as Daniel Miller in the flesh.  Though Richard Armitage’s name has not appeared in the credits for BS3 episodes 4 & 5, his Daniel Miller character face has.  So I’ll remain cautiously hopeful.

And with the BS 3 episode 6 coming up on Sunday titled “In cold hell”, my guess is that BS 3 is going to try to wring more pathos out of the missing Daniel plot for another week.

I also “ship” Esther Krug (portrayed by Mina Tander) and Daniel Miller (portrayed by Richard Armitage)  below in BS 2 epi 7 (Thanks to Chrissyinwm!). They have a certain chemistry—or at least, I swoon at the love and devotion I see in Daniel’s eyes for Esther.  Sighhh! 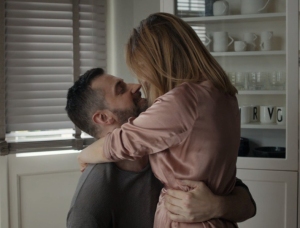 One question, though.  The BS 3 episode titles seem even more obtuse than last season’s.  I’m scratching my head for the meaning/symbol reference for last week’s BS 3 episode 5’s title of “The Four Policemen”.  Any thoughts?  Ha!

Hoping you have a lovely day! Cheers!