Posted on February 14, 2020 by Gratiana Lovelace

Valentine’s Day is one of those special holidays that makes you want to either corner the market on chocolate and flowers to bestow upon your loved one—or receive them yourself—or roll your eyes because of the holiday’s rampant commercialism.

I’m in the chocolate category—even though my eyes bulged at the $5.99 price for the mushy sentiments Valentine’s Day card that I bought for my hubby.  His chocolates that I gave him didn’t even cost that much.  Ha!

And chocolates can be tricky.  You see, my hubby has been given the strict low cal diet talk by his doctor—because my hubby is now considered pre-diabetic.  And he is really taking the watching his calories talk to heart.  Even though he has great blood sugars between 90 and 130 fasting, he some how thinks that going into the low triple digits on a blood sugar score is tantamount to disaster.  Well, he can be excused, he’s new to the blood sugar testing game—and it seems that his diabetes educator put the fear of God and carbohydrates into him.

Though seriously, it’s nice to finally have him being more selective with what he eats—including portion sizes, and limiting his fried foods intake.  Because now that he is eating smaller and less greasy portions, he is no longer extolling me to eat larger portions—so he didn’t feel sheepish about his eating, I presume.  However, my hubby his 6 foot  4 inches tall, so he can really chow down—and in no way would I ever want to eat as much as he consumes, even now.  Ha!   But he also rides his bike several times a week as exercise which helps him with improving his fitness.

And though I have been on a losing weight track for some time now—slow and steady, my having dropped four clothing sizes—I’m at my next plateau, before I start losing some more weight.  Basically, I’m within 30 pounds of my wedding weight from 30 years ago, which has been my initial target goal weight.  Though I might just keep going for my ideal weight—which would be another 30 pounds.

And despite my arthritis and herniated discs in my back–I am no one’s description of an athlete–try trudging a shopping cart through heavy snow in a parking lot and you’ll get a sense of the aerobic workout that I get going to and from the parking lot and my department’s building at the university with my rolling walker.  Both my legs and my arms are getting exercised.  Now I just need to get back to doing a kind of combination stomach muscle and tush clenching–that is just short of doing sit ups, due to the back pain—to tone up my tummy and tush.  Snap!

Of course Valentines Day chocolates from my wonderful Hubby don’t help with my own diabetes diet.  But it is all in moderation—and I do allow myself some treats, within my carb count boundaries.  Ha!   I ate three pieces from the chocolates box that he gave me—and he offered me one piece of chocolates that I gave him.   And I have always said that gifted treats do not contain calories/carbs.  *wink*

And I’m hoping that my Hubby and I might go out for lunch on Saturday to further celebrate Valentine’s Day—when the winter weather is supposed to be merely frigid, whereas Friday’s temps will be subzero windchill.  Ha!

So Dear Friends, I’m sending you good thoughts and all of my best wishes for your Valentine’s Day, across the miles.  And I’m hoping that you remember to pamper yourself, too—whether that means chocolate confections, flowers, or binge watching that handsome and talented British actor fella’s tv and films, etc.  Sighhhh!   Holiday Cheers!  Grati  ;-> 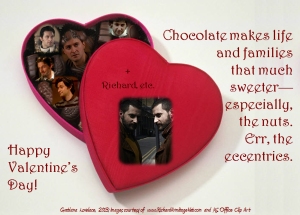