Working on my tax forms … with Harry commiserating with me about the electronic glitches “Cobblers!”

And then, Harry can always put a smile on my face with that mischievous smirk of his!  Sighhh! 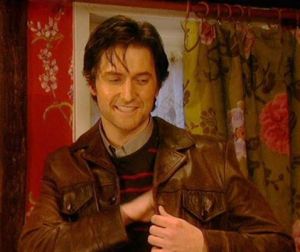 Nota Bene:  Thanks to TeresaA for previously sharing the top gif!
The second “Vicar of Dibley” image, of Richard Armitage as Harry Kennedy is my/Grati cap.