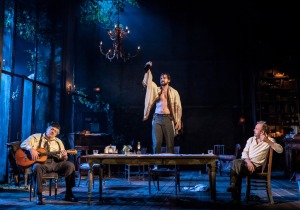 I’m not sure how I missed coming across this wonderful gem of an Uncle Vanya in 2020 play preview review by mrmonstagigz from  January 15, 2020, but I’m glad that it was recommended in the Richard Armitage  in Uncle Vanya play Facebook group post, that I saw yesterday.

The play critic praises both the leads of British actors Richard Armitage as Dr. Astrov and Toby Jones as the eponymous Uncle Vanya—as well as the rest of this small but mighty ensemble cast including Aimee Lou Wood as Sonya, Ciarin Hinds as Sonya’s previously absent father Professor Serebryakov, and Rosalind Eleazar as his young trophy wife, Yelena.  The interwoven romantic yearnings among and between these five characters alone serves up some riveting and poignant theatrical moments. Rounding out the stellar Uncle Vanya cast are Peter Wight, Dearbhla Malloy, and Anna Calder-Marshall.

Mrmonstagigz’s Uncle Vanya 2020 play production review makes me long to have been one of the lucky ones to see this Uncle Vanya production before the current COVID 19 pandemic shut down theatres and other community wide congregate setting venues in Spring 2020.

And with nations and peoples around the world struggling to save lives and livelihoods from the scourge of COVID 19, it makes us truly appreciate even the simple pleasures that we may have lost, and that we hope to regain—moving freely in our communities and society without worrying about contracting a life threatening illness, or infecting friends and family with it, let alone losing our jobs and homes and way of life because of economic upheavals.

Much is still uncertain in our lives due to COVID 19.  But for now, given the Harold Pinter Theatre offering a (perhaps vain) hope of being able to reopen and resume performances of the Uncle Vanya production later on this year when the pandemic has abated (wishful thinking there), I can only hope that if that comes to pass—and if all of the original cast members return, especially the talented British actor Richard Armitage—that Digital Theatre films it for wider distribution to the many fans like me who can’t afford to travel across an ocean to England to see their favorite actors on stage.

The Digital Theatre platform was how I was able to watch Richard Armitage’s (image below) riveting performance as John Proctor in the 2014 production of The Crucible play from the comfort of my middle of the USA home.

Fingers crossed that I and other fans may be able to do the same with viewing the 2020 Uncle Vanya play production starring Richard Armitage, via Digital Theatre as well.

But, of course, I’m mostly hoping that everyone’s lives and livelihoods return to what may be a new normal for us one day, when we and our loved ones, friends, colleagues, and neighbors near and far are mostly past this pandemic.

Until then, we will have to take one day at a time—sometimes distRActing ourselves with lovely wishes, hopes, and dreams about being enraptured by the art of storytelling through live theatre.

Wishing you a safe, healthy, and happy day!  Cheers!