Posted on November 30, 2011 by Gratiana Lovelace 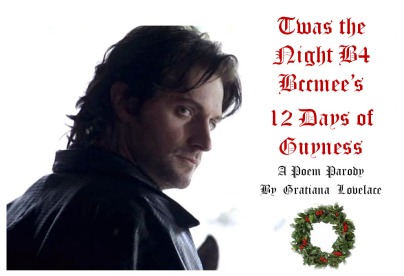 Twas the Night B4 Bccmee’s 12 Days of Guyness, when all through Armitage World House
Not an RA fangurl was stirring, not even Melissa the Mouse.
Sir Guy’s buckled vestings were hung by the chimney with care,
In hopes that Sir Gisborne soon would be there.

The fangurls were nestled all snug in their beds,
While frissions for sugar peaches danced in their heads.
And with drama or comedy stories and pictures to adapt,
The vidders, bloggers, designers, and authors settled our brains for a long winter’s nap.

When out on the lawn, Harry Pearce started to natter,
Lucas sprang from his floor bed to see what was the matter.
Away to the window Heinz flew like a flash,
Not Gordon, but Captain America, made him dash.

The moon on the chesticles of Sir Guy de-armoured we know
Gave lusty dreamings at all hours to Gisborne fans of the Robin Hood show.
When, what to my wondering eyes over Sir Guy’s shoulder should appear,
But a miniature Vasy pulling a sleigh, harnessed up like a reindeer.

And as comb-overs that before the wild hurricane fly,
When Robin and Guy the Panther meet in battle, the hair count goes to Sir Guy.
So up to the castle keep, the outlaws they flew,
With bags full of swag for the villagers, too. 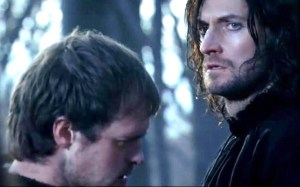 And then, in a twinkling, Sir Guy heard on the roof
The prancing and pawing of each little Vasy hoof.
But as Sir Guy drew up his head, and was turning around,
Down came the musicians trumpeting their brass sound.

Sir Guy’s eyes how they twinkle, his smirk how merry!
His cheeks are chiseled like marble, his nose Romanesque, oh very!
Guy’s sly pursed mouth is drawn up like a bow,
And the beard of his chin has just the right amount of stubble, don’t you know.

The hilt of his sword that Sir Guy clasps so tightly,
Shows the wear and tear of being used by him knightly.
Sir Guy has a face the broads like, and a taut little belly,
That ladies bounce coins off of I tell you, no really. 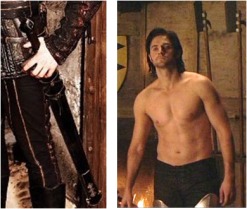 Richard Armitage as Sir Guy was not chubby nor plump–a right manly self,
After all, in years to come he would portray a Dwarf, not an Elf.
A smirk of his mouth and a sexy toss of Sir Guy’s tress laden head,
Soon told the wenches they had nothing to dread.

Sir Guy spoke not a word, but went straight to his work,
And filled Nottingham’s coffers, not letting the villagers shirk.
And laying his finger aside of his noble nose,
And turning his leather clad bod, Sir Guy struck quite a pose. 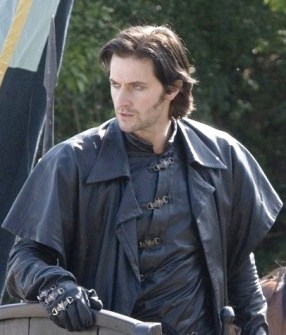 Sir Guy sprang to his Bay mare, to his garrison he gave a whistle,
And away they all rode as they hunted down Vasy the weasel.
But I heard Sir Guy exclaim, ere he rode out of sight,
“Happy 12 Days of Guyness, and to all fair maids my goodnight!” 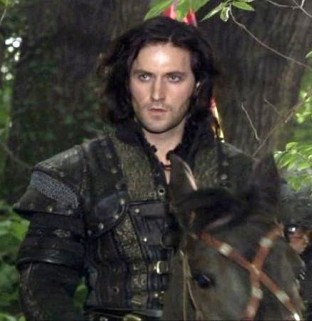 “On second thought, ladies.” Remarks Sir Guy.
“Where do you want me to sleep?”

P.S.  Check back at this blog on Thursday for a special video parody I also created to complement Bccmee’s blog (http://fanvideos.wordpress.com/) that day, because Thursday, December 1, 2011 Bccmee will launch her “12 Days of Guyness” mediated images events.  Bccmee is a genius when it comes to media technical creativity.  I’m just a novice.  But, it’s been fun planning my Guyness blog post parodies to complement her blog’s Guyness events.  And I appreciate her encouragement of me.  Thanks!

(2)  Image representing Melissa the Mouse–a character that I created and will expand upon in a followup post sometime–was found at http://images.macworld.com/appguide/images/312/621/772/ss2.jpg

(3) The people in bed graphic–and modified by me to represent RA fangurls–was found at http://www.russellrhodes.com/images/ROOC1337A-PROD.jpg

(5)  And  special thanks to my RA friend Dhana for proofreading an early draft of my poem parody and catching some of my typos–or the MSWord “guessing” typos.

Gratiana Lovelace is my nom de plume for my creative writing and blogging. I write romantic stories in different sub genres. The stories just tumble out of me. My resurgence in creative writing occurred when I viewed the BBC miniseries of Elizabeth Gaskell's novel North & South in February 2010. The exquisitely talented British actor portraying the male lead John Thornton in North & South--Richard Crispin Armitage--became my unofficial muse. I have written over 50 script stories about love--some are fan fiction, but most are original stories--that I am just beginning to share with others on private writer sites, and here on my blog. And as you know, my blog here is also relatively new--since August 2011. But, I'm having fun and I hope you enjoy reading my blog essays and my stories. Cheers! Grati ;-> upd 12/18/11
View all posts by Gratiana Lovelace →
This entry was posted in Authors, Creative Writing, Fangurling, Love and Relationships, poem, Richard Armitage, Romance and tagged parody, poem, Richard Armitage, Sir Guy. Bookmark the permalink.