Posted on September 16, 2017 by Gratiana Lovelace 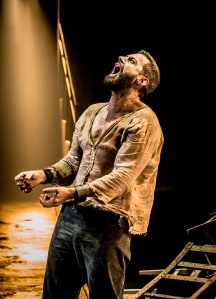 And my personal DT account shows that I can see the listing of “The Crucible” (the 2014 production directed by Yale Farber at The Old Vic) starring British actor Richard Armitage–and what I presume is the “Richard Armitage in Conversation” interview–for ten years starting Saturday!

That is a huge leap forward from blocked access!

Applause [below via Simonne]  to the power of the little guys and gals–or a lot of them in concert–who take a stand for their access rights!

We are Global Team Armitage!

And my thanks especially go to social media maven friends VioletDutchblogger and TeresaA on Facebook, Esther at her Book of Esther blog, Perry at her Armitage Agonistes blog, and others for keeping me and other fans of the exquisitely talented British actor Richard Armitage  (yeah, that amazing guy, immortalized in a wallpaper collage of just a few of his key characters, by Thorin of Erebor below, enjoy!)  updated developments about regaining access to previously purchased Digital Theatre shows.